I have seen the Lord!

20 Early on the first day of the week, while it was still dark, Mary Magdalene went to the tomb and saw that the stone had been removed from the entrance. 2 So she came running to Simon Peter and the other disciple, the one Jesus loved, and said, “They have taken the Lord out of the tomb, and we don’t know where they have put him!”

3 So Peter and the other disciple started for the tomb. 4 Both were running, but the other disciple outran Peter and reached the tomb first. 5 He bent over and looked in at the strips of linen lying there but did not go in. 6 Then Simon Peter came along behind him and went straight into the tomb. He saw the strips of linen lying there, 7 as well as the cloth that had been wrapped around Jesus’ head. The cloth was still lying in its place, separate from the linen. 8 Finally the other disciple, who had reached the tomb first, also went inside. He saw and believed. 9 (They still did not understand from Scripture that Jesus had to rise from the dead.) 10 Then the disciples went back to where they were staying.

11 Now Mary stood outside the tomb crying. As she wept, she bent over to look into the tomb 12 and saw two angels in white, seated where Jesus’ body had been, one at the head and the other at the foot.

“They have taken my Lord away,” she said, “and I don’t know where they have put him.” 14 At this, she turned around and saw Jesus standing there, but she did not realize that it was Jesus.

Thinking he was the gardener, she said, “Sir, if you have carried him away, tell me where you have put him, and I will get him.”

She turned toward him and cried out in Aramaic, “Rabboni!” (which means “Teacher”).

17 Jesus said, “Do not hold on to me, for I have not yet ascended to the Father. Go instead to my brothers and tell them, ‘I am ascending to my Father and your Father, to my God and your God.’”

18 Mary Magdalene went to the disciples with the news: “I have seen the Lord!” And she told them that he had said these things to her.

It promises to be one of the greatest sights in all of Europe. Its full name is Notre Dame de Paris or “Our Lady of Paris.” Technically, it is a French Gothic cathedral built from 1160 to 1260 but has undergone a few modifications in the centuries since (Wikipedia). One of the largest modifications I’m sure will be in the years to come as the building caught fire last Monday and much of it will need to be reconstructed. It was a horrible sight to see the ancient structure in flames and to watch as the central spire fell. The sight of the Notre Dame was horrible, but it pales in comparison to the sight of Jesus’ death on Good Friday. I wonder though if the Notre Dame fire had more people watching it than attended Good Friday services. This Easter morning, our eyes get to look beyond this fallen world doomed to fire on Judgement Day to the blessed hope of the resurrection where we will join with Mary and all those who got to say on the first Easter,

It is a tragedy that Notre Dame caught fire. It is especially tragic that it happened during Holy Week. Many traveled to worship in the ancient cathedral for Easter, but now the building is closed off to even the most faithful pilgrims. It is tragic that the cathedral is closed, but the real tragedy with Notre Dame and other buildings like it scattered throughout Europe and our own country is that they have not been full of worshipers for some time. Big events like Easter draw in crowds, just like at the time of Jesus with the Passover bringing in large crowds to the temple in Jerusalem, but aside from the major holidays regular worship has always been a struggle. We aren’t surprised by that though. Jesus did say, in Matthew 7:14,

“But small is the gate and narrow the road that leads to life, and only a few find it.”

The unexpected fire at Notre Dame has left millions stunned, but the first Easter morning, the death of Jesus only brought a few to his tomb.

Jesus’ death left his followers stunned because they did not expect it. The disciples were now living in fear for their own lives after watching the crowds turn on Jesus. The women were afraid too but were willing to venture out the first Easter morning to go to the tomb and finish preparing Jesus’ body for burial. When the women saw the empty tomb though, Mary Magdalene turned around and 2…came running to Simon Peter and the other disciple, the one Jesus loved, and said, “They have taken the Lord out of the tomb, and we don’t know where they have put him!” First, Jesus death wasn’t part of the plan and now the empty tomb, Jesus’ followers did not understand what was going on.

The world may have watched the flames consume Notre Dame, but this wasn’t the only time the building was threatened. During the French Revolution, the building was rededicated to an atheist religion and was used as a warehouse. Then, Napoleon Bonaparte restored the building to the Catholic Church at the turn of the 19th century. It is hard to imagine a building like Notre Dame serving as anything but a church, but since Victor Hugo published his book “The Hunchback of Notre-Dame” in the early 1800s the building has been associated more and more with fantasy, than faith. Anytime the purpose of Notre Dame changes from sharing the message of Jesus to something else, the world suffers for it.

When the plans of Jesus’ followers were different than his, they suffered for it. When Jesus’ followers forgot his words, they lost sight of what Jesus came to do for them. After Simon, the disciple Jesus loved and Mary got back to the tomb, they weren’t sure what to make of what they were seeing. The disciples examined the contents of the tomb but didn’t find anything to satisfy them leaving it to return to the other disciples. However, Mary stayed at the tomb. Mary stayed and when she looked in the tomb again there were angels. They asked her why she was crying. She told them what she thought had happened, that someone had removed Jesus’ body and she wanted to know where they had taken him. Then, Mary turned, and saw Jesus, whose identity was hidden at this time, standing behind her. And he asked her why she was crying. She told Jesus, whom she thought was the gardener, the same thing she had told the angels. Then

Mary and the disciples did not understand what was happening Easter morning because it only made sense by faith. They had seen Jesus do miracles, even raise people from the dead, but if he was gone, who would raise him?

The body wasn’t in the tomb anymore and Mary had no one to turn to except a man who might be the gardener and might have seen where the grave robbers had taken Jesus.

I am sure Mary felt helpless like the first firefighters on the scene at Notre Dame watching the flames spread quickly throughout the old timbers.

I am sure that Mary had all kinds of thoughts rushing through her mind and the emotions of losing Jesus and the physical strain of sleepless nights wanting to have closure with the body and the spiritual strain of wondering what had happened to her Lord. She was rushing to get some kind of plan together to move forward.

Mary had so much distracting her, but Jesus only had to say it once. And,

16…She turned toward him and cried out in Aramaic, “Rabboni!” (which means “Teacher”).

In an instant, relief struck Mary. Faith regained control of her emotions, her mind and her body, and she was overjoyed. She reached out and clung to Jesus, but he said,

17…“Not yet… Go instead to my brothers and tell them, ‘I am ascending to my Father and your Father, to my God and your God.’” 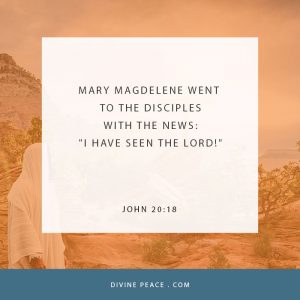 18 Mary Magdalene went to the disciples with the news: “I have seen the Lord!”

And she told them she saw Jesus alive.

We have all been distracted this week. Even with it being Holy Week and having extra services on Thursday and Friday, the world doesn’t slow down. In fact, I bet all of us have talked more about the fire at Notre Dame in the last week than we have about Jesus, at least with our friends and family outside of church. Yet, we are here. We know that our plans often go off in different directions and we get distracted by life, even though the Word of God continues to call out to us. What amazing love our God has for us that he does continue to call out to us. That despite our hectic lives and lack of putting our faith into practice, nothing can stop the words we hear today from being true,

It probably sounded like a prank when the first firefighter who got the call that Notre Dame was on fire told the rest of the firefighters. I can imagine them saying, “Good one, and is the Louvre flooded?” Then how quickly they must have responded when they saw their national treasure was threatened. When God gave Isaiah the prophecy recorded in Isaiah 12:2,

“Surely God is my salvation; I will trust and not be afraid. The Lord, the Lord himself, is my strength and my defense; he has become my salvation.”

Most of Israel thought it to be foolishness, but God made good on his promise through Jesus’ resurrection. And for us, the words of Paul to the Corinthians in 1 Corinthians

“Listen, I tell you a mystery: We will not all sleep, but we will all be changed— 52 in a flash, in the twinkling of an eye, at the last trumpet. For the trumpet will sound, the dead will be raised imperishable, and we will be changed.”

Sound like foolishness, but not with Jesus. Paul said,

54…“Death has been swallowed up in victory.” 56 The sting of death is sin, and the power of sin is the law. 57 But hanks be to God! He gives us the victory through our Lord Jesus Christ.

Notre Dame promises to be one of the greatest sights in all of Europe, but it will be closed to the public this Easter. It was a horrible sight to see the ancient structure in flames and to watch as the central spire fell, but it pales in comparison to the sight of Jesus’ death on Good Friday. No matter where believers are gathered this Easter morning, our eyes get to look beyond this fallen world doomed to fire on Judgement Day to the blessed hope of the resurrection. That first Easter morning, when Mary saw the empty tomb, she was sad until Jesus Word’s reminded her what it meant. Her Savior was risen from the dead, her sins were forgiven and eternal life with him in heaven was hers forever. Mary’s joy is ours too this Easter morning as we get to say,

“I have seen the Lord”

in his word, risen for me! Amen.