A Light Has Dawned!

2 The people walking in darkness

have seen a great light;

on those living in the land of deep darkness

a light has dawned.

3 You have enlarged the nation

and increased their joy;

they rejoice before you

as people rejoice at the harvest,

when dividing the plunder.

4 For as in the day of Midian’s defeat,

the yoke that burdens them,

the bar across their shoulders,

the rod of their oppressor.

5 Every warrior’s boot used in battle

and every garment rolled in blood

will be destined for burning,

will be fuel for the fire.

to us a son is given,

and the government will be on his shoulders.

And he will be called

7 Of the greatness of his government and peace

there will be no end.

He will reign on David’s throne

and over his kingdom,

establishing and upholding it

with justice and righteousness

from that time on and forever.

The zeal of the Lord Almighty

This service of readings and songs has pointed us to the light Jesus brought into our dark world. We began with our first reading at creation with God literally saying,

“Let there be light,” and there was light.

We heard again that God’s creation was made good, including people, but Adam and Eve lost the good image of God when they gave into the darkness of the devil’s temptation. Complete darkness came into the world with sin. Man no longer walked with God enjoying his love and all his goodness. Instead, mankind walked alone. All seemed lost as Adam and Eve stumbled around trying to hide from God in the garden, terrified of what life was without him and with the guilt of sin, but the rescue plan was already prepared by God and he gave us the good news that the Savior would come, born of a woman to crush the serpent’s head. In our sixth reading from Isaiah 9, the people lost in darkness saw more clearly God’s plan to rescue them as Isaiah prophesied, “a light has dawned!”

Isaiah served as a prophet during some of the darkest times in Israel’s history. The once great kingdom of Israel was now a broken people, far from what God wanted them to be. Isaiah served as a prophet to the two tribes of the southern kingdom of Judah, which separated from the ten tribes of northern Israel about two hundred years earlier. The two nations had abandoned God’s plan for them to be his people and chased after earthly wealth and glory, but were realizing their fault in abandoning God as more powerful nations threatened them. Isaiah was called to turn the people from the darkness of their sinful, selfish hearts and back to God. He was called to give them hope as he said in the verse just before our reading from Isaiah 9,

Nevertheless, there will be no more gloom for those who were in distress. In the past he humbled the land of Zebulun and the land of Naphtali, but in the future he will honor Galilee of the nations, by the Way of the Sea, beyond the Jordan.

Isaiah gave the people hope using the illustration of Zebulun and Naphtali, these were two tribes and therefore two territories of the northern kingdom of Israel, that had been ravaged by war for centuries and were finally beaten, overtaken and deported by the Assyrians. The loss of their country was the darkest moment for the people in their turn away from God.

Isaiah was called to point the people of God away from their dark reality and back to the light. He said, 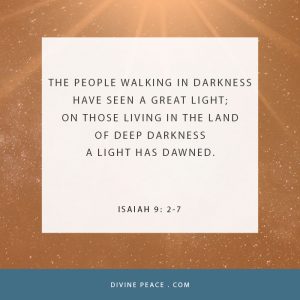 2 The people walking in darkness have seen a great light; on those living in the land of deep darkness a light has dawned.

For Judah and Israel, the promise that the lands of Naphtali and Zebulun would be restored gave the people hope. In fact, those lands, referred to as Galilee, were the places where Jesus did much of his ministry. Galilee and that broken land filled with broken people who had be overtaken, deported and at Jesus’ time were a mixed race of Israelites and other nations, also known as the Samaritans, was shown honor because Jesus came there to heal the people of many earthly sufferings and in such a greater way show them that the light had come as Isaiah said,

“a light has dawned.”

For us and for all people the Light has come in Jesus, as we read in our second reading,

“For God so loved the world that he gave his one and only Son, that whoever believes in him shall not perish but have eternal life.”

Jesus Christ is the light that has come into the world, bringing God’s forgiveness and eternal life to all who believe.

God’s Word reveals that Jesus is our only hope for life in the dark world of death. All around us we see the signs of darkness in war, poverty, divorce, bullying, crime, guilt, anxiety, opioids, etc. God’s Word identifies all of that as sin and the results of sin. And as we read in our third reading from Joel, a day of darkness, is coming. Judgment Day is coming, and it will be a day of darkness and gloom for all those who are not prepared. God knows we constantly battle against our sins and so he said called us to be prepared for his judgment through the prophet Joel,

“return to me with all your heart…Return to the Lord your God, for he is gracious and compassionate, slow to anger and abounding in love, and he relents from sending calamity.”

The Lord of love begs us to return to him, repenting of our sin. Isaiah encouraged the people of his time that God alone has the ability to save. He reminded them what God did through Gideon. God gave Gideon and a small army of 300 Israelite soldiers a great victory over the much larger Midianite army in order to save Israel. God wants us to know that the only way to be safe in the darkness is to trust him as the light.

And, a light has dawned on all of us through God’s gift of faith in Jesus. All our work in this life, all our work in school to write papers, finish projects and graduate, all our work at work making sales, meeting deadlines and working overtime, all our work to keep up relationships with friends, to raise a family and find happiness are all put into perspective with what we have in Jesus. He transforms all our work from something we do for ourselves or others, hoping to find purpose in this dark world, into joyful work we can rejoice in because all we do in this world as believers is done as lights. We live differently from the work because we give credit to God for all we have and all we get to do. As Isaiah gave credit to God for all he had done for Israel, to God as the one who enlarged their nation, increased their joy and caused them to rejoice

as people rejoice at the harvest, as warriors rejoice when dividing the plunder.

God made us his people to serve him with our songs, prayers and how we live in all aspects of our lives as people of a new kingdom.

Isaiah called Jesus the ruler of a new kingdom. A kingdom established through the justice and righteousness of God. Isaiah said,

6 For to us a child is born, to us a son is given, and the government will be on his shoulders.

Jesus is the ruler of heaven and of all believers because he allowed God’s justice to be carried out against him for our sins. And after his resurrection, he now rules his kingdom victorious over the powers of evil. As his people, he has called us to walk in the light as our fourth reading from 1 John says,

“God is light; in him there is no darkness at all.”

We cannot live as members of God’s kingdom as if we have earned the right to be there. It was established by God and we were made members of the kingdom by God. Therefore, we are encouraged to walk in the light of God’s love and forgiveness. In other words, we cannot

8 claim to be without sin…if we do, then we deceive ourselves and the truth is not in us.

Rather, John encourages us to

9…confess our sins, because God…is faithful and just and will forgive us our sins and purify us from all unrighteousness.

As a result of God’s work in our hearts we confess,

In our fifth reading from Psalm 27, the writer King David confessed the hope we all share as believers,

13 “I remain confident of this: I will see the goodness of the Lord in the land of the living.”

Our fears are calmed with God as our light who shows us his strength and our eternal home. God has won the battle for us so that we do not need to worry or strive to become light. He has made us perfect, made us to be without sin and made us light. Isaiah wrote,

5 “Every warrior’s boot used in battle and every garment rolled in blood will be destined for burning.”

Isaiah’s simple message is that all our efforts, everything we might use to battle against evil or justify ourselves before God are given up as fuel for the fire. We do not find our identity by who we are in are broken state in this dark world. We are not defined by the standards of those around us. Instead, A Light Has Dawned!

God sent a clear sign to the world that Jesus was different than the rest of us. In a couple chapters before our sixth reading from Isaiah 9, Isaiah said,

“Therefore the Lord himself will give you a sign: The virgin will conceive and give birth to a son, and will call him Immanuel.”

God brought light into the world through the miraculous birth of Jesus. No one else can claim to be the Son of Man and the Son of God. No one else made such an impact in our world because Jesus was the light in the darkness. God revealed so much of what Jesus would do in the names he gave Isaiah,

This service of readings and songs has pointed us to the light Jesus brought into our dark world. We have seen God’s work to bring us peace with him and the final reading tonight from Luke 2 leaves us with the same peace as those who saw Jesus the first Christmas. Peace from the dark world of sin that oppresses us. Peace in our Savior who lights the way to a new kingdom. Peace in the prophecies fulfilled. Peace because

20 The shepherds returned, glorifying and praising God for all the things they had heard and seen, which were just as they had been told…A light has dawned!”