Bring Salvation to the Ends of the Earth!

38 “Therefore, my friends, I want you to know that through Jesus the forgiveness of sins is proclaimed to you. 39 Through him everyone who believes is set free from every sin, a justification you were not able to obtain under the law of Moses. 40 Take care that what the prophets have said does not happen to you:

for I am going to do something in your days

that you would never believe,

even if someone told you.’”

42 As Paul and Barnabas were leaving the synagogue, the people invited them to speak further about these things on the next Sabbath. 43 When the congregation was dismissed, many of the Jews and devout converts to Judaism followed Paul and Barnabas, who talked with them and urged them to continue in the grace of God.

44 On the next Sabbath almost the whole city gathered to hear the word of the Lord. 45 When the Jews saw the crowds, they were filled with jealousy. They began to contradict what Paul was saying and heaped abuse on him.

46 Then Paul and Barnabas answered them boldly: “We had to speak the word of God to you first. Since you reject it and do not consider yourselves worthy of eternal life, we now turn to the Gentiles. 47 For this is what the Lord has commanded us:

“‘I have made you a light for the Gentiles,

that you may bring salvation to the ends of the earth.’”

48 When the Gentiles heard this, they were glad and honored the word of the Lord; and all who were appointed for eternal life believed.

Cape Horn, the Bering Strait and Mount Everest are some of the most remote location in the world. They are the kinds of places you find on people’s bucket lists and places few have seen unless they have the means to get there. In our second lesson today from Acts 13, Paul and Barnabas were not heading to a place that many people have on their bucket list nor a place many would call one of the ends of the earth. Instead, they were heading to a place called Pisidian Antioch. Pisidian Antioch was not “the end of the earth” to people living in Galatia, the area in the Mediterranean now known as the country of Turkey. Antioch was a Roman colony with enough Jewish residents to support a synagogue. The synagogue meant that there were Jews and Gentile converts who needed to hear about Jesus, so Paul and Barnabas went in order to carry out what Jesus said in Acts 1:8,

“You will be my witnesses in Jerusalem, and in all Judea and Samaria, and to the ends of the earth.”

Jesus’ call to his disciples to spread the good news of Jesus’ forgiveness extends beyond the twelve disciples and the believers at the time of Jesus to all who trust in Jesus. His calling is at the heart of our mission as a church and is reflected in the mission of our larger church body, the Wisconsin Evangelical Lutheran Synod, which reads, the Wisconsin Evangelical Lutheran Synod

“exists to make disciples throughout the world for time and for eternity.”

Because Jesus gave us all this mission to be his witnesses, we have set aside today as Mission and Ministry Sunday to refocus ourselves on the mission Jesus has given us. That mission is summarized by the words of the prophet Isaiah, as quoted by St. Paul, our mission is to Bring Salvation to the Ends of the Earth.

As we pick up with Paul and Barnabas heading to Pisidian Antioch in Acts 13, Paul is in the middle of his first of four missionary journeys around the Mediterranean. Paul and Barnabas had been invited to speak a word of encouragement at the synagogue in Antioch and Paul began by briefly summarizing God’s dealings with the people of Israel from

“the stay in Egypt”

to the reign of King David. Paul then connected King David to Jesus by saying,

“From this man’s descendants God has brought to Israel the Savior Jesus, as he promised”

God made the promise to King David that the Savior would be his descendant in 2 Samuel 7,

God revealed to David that the Savior would be the rightful heir to the throne of Israel, but this Savior would rule as the King of a greater Israel, God’s people by faith. Jesus would be the King of all believers forever in heaven. Paul shared how Jesus won his victory over sin and death as our Savior King by his death and burial, and also that

“God raised him from the dead,”

which was in keeping with the prophecies given to King David and the prophet Isaiah centuries earlier. Finally, Paul was very clear that Jesus’ forgiveness was for them by saying,

38 “I want you to know that through Jesus the forgiveness of sins is proclaimed to you.”

Paul was glad to share the good news of Jesus with all those in the synagogue that day, but he also made sure they understood the consequences for rejecting Jesus’ forgiveness of sins. Paul needed to be clear with his fellow Jews because he understood how easy it would be for them to turn away from trusting in Jesus and back to trusting in their ability to keep God’s law. Instead, Paul said,

39 Through him everyone who believes is set free from every sin, a justification you were not able to obtain under the law of Moses.

Paul made it clear that the law of Moses was only able to show us our sins and inability to keep God’s law, as he made even clearer when he quoted Deuteronomy 27 in his letter to the Galatians,

“Cursed is everyone who does not continue to do everything written in the Book of the Law.”

We could not keep the law, but Jesus was able to keep it perfectly for us as Paul continued to say, quoting Deuteronomy again,

Christ redeemed us from the curse of the law by becoming a curse for us, for it is written: “Cursed is everyone who is hung on a pole.”

It was the perfect life of Jesus sacrificed on the cross that freed us from the punishment of our sins. For those who believe, that message is the sweet peace and freedom of the gospel, but to those who reject, it is foolishness. Thus, Paul continued to say,

40 Take care that what the prophets have said does not happen to you: 41 “‘Look, you scoffers, wonder and perish, for I am going to do something in your days that you would never believe, even if someone told you.’”

Sadly, many today still rely on obedience to laws for salvation. Whether someone is following a Christian denomination or some other religion, if a person relies on their own set of principles, pillars, laws or their own path through life that seems good or makes them feel like they are a good person, they have no hope. The false hope a person creates when they put their trust in their own abilities always ends with disappointment and failure. The crushing weight of the statement from James 2:10,

“For whoever keeps the whole law and yet stumbles at just one point is guilty of breaking all of it,”

takes away any hope we have for living in such a way that God could be pleased with what we’ve done on our own when we stand before him on Judgment Day.

It is only through Jesus that

39 “everyone who believes is set free from every sin.”

Our hope must rest alone on Jesus as Paul wrote in Ephesians 2,

4 But because of his great love for us, God, who is rich in mercy, 5 made us alive with Christ even when we were dead in transgressions—it is by grace you have been saved. 6 And God raised us up with Christ and seated us with him in the heavenly realms in Christ Jesus.”

As believers, we have hope in Jesus and now have that message of his grace and forgiveness to spread to others. Just as God the Father said about Jesus in Isaiah 49,

6 “I have made you a light for the Gentiles, that you may bring salvation to the ends of the earth.”

Paul, takes the same phrase and applies it to us saying, 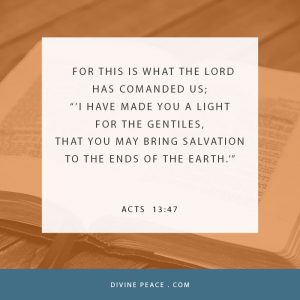 47 “For this is what the Lord has commanded us.”

We are lights in the world by reflecting the love of Jesus and by sharing his Word with the world.

Paul and Barnabas were invited to speak at the synagogue, but opportunities to shine the light of the gospel into this dark world take many forms. For Paul and Barnabas, we hear that

44 “Almost the whole city gathered to hear the word of the Lord.”

And Paul took the opportunity to share both the law and the gospel with the people. Again, if they heard what Jesus had done in their day, but rejected it, then they would be lost. On the other hand, if they heard that Jesus provided forgiveness of sins because we could never keep the law of Moses, then they would be free from every sin and hopeful for eternal life in heaven.

God opened the door for Paul and Barnabas, and he is doing the same for us today. By his grace, God has allowed our church body to carry the good news of Jesus

to the ends of the earth.

Through advances in communication via internet and cell phones, people from around the world hear the good news of Jesus. For example, more than a decade ago WELS was forced to make drastic cuts in world missions, including cutting LATTE (Latin America Traveling Theological Educators—A traveling seminary that was training future pastors all over Latin America). Today millions of Latin Americans connect to Facebook via their smartphones. More than a million Latin Americans connect to Academia Cristo’s Facebook page. They come from nearly every country in Central and South America. Some 4,000 are requesting to participate in online classes in order to learn more of what God’s Word reveals to us. One of the goals of the Latin America mission team is to identify those who have the ability and the desire to be educated as evangelists and pastors. Beyond these efforts, the Joint Mission Council of the WELS is supporting outreach efforts to Hmong, Hispanic, South Asian, Sudanese, Liberian, Vietnamese, and Chinese people living in the U.S. In many cases, these immigrants want to share the gospel hope they now possess with relatives and friends in the countries from which they emigrated. Our prayers and offerings support the work of our church body to go and spread the good news of Jesus.

bringing salvation to the ends of the earth

includes everywhere in between. The ends of the earth includes your neighbor over the back fence, your friend at work, that Sunday school class that still needs a teacher, the family that just moved in down the street from you, reinvigorating our congregation’s evangelism committee and making new efforts to reach the unchurched in our own community. It also includes your prayers and offerings to enable others to go in our name. As a result of all these efforts, all over the world as at Antioch, people are

“glad and honor the word of the Lord”