24 By faith Moses, when he had grown up, refused to be known as the son of Pharaoh’s daughter. 25 He chose to be mistreated along with the people of God rather than to enjoy the fleeting pleasures of sin. 26 He regarded disgrace for the sake of Christ as of greater value than the treasures of Egypt, because he was looking ahead to his reward.

People do a lot of things to get relief from the summer heat. Here in Texas a few of the options for people looking to get relief from the heat are going to the pool, the lake or the ocean. These are great options for cooling off our bodies, but what about keeping hydrated? A pool, a lake and the ocean are large bodies of water, but you can’t drink them. If you drink from any of these, they might give you brief relief, but pool, lake and ocean water are not going to give you the relief you need. We face a similar problem spiritually. In our reading today from Hebrews 11, we will see that Moses turned away from the brief pleasures of living in Pharaoh’s palace to be mistreated along with God’s people. Today you and I are tempted to give up on being mistreated because of our faith by giving into the brief pleasures of sin, but our reading from the book of Hebrews encourages us to by faith in Christ refuse sin’s brief reward.

For many years, Moses enjoyed living the royal lifestyle as the adopted son of Pharaoh’s daughter. Moses grew up in Pharaoh’s palace enjoying the best food, best education and all the comforts of Egypt, but his path to the palace came at a high price. Moses was born to two Hebrew slaves at a time when the Pharaoh was afraid of the growing numbers of the Hebrews and the possibility of them staging a rebellion. Out of fear, the Pharaoh issued an edict that all Hebrew baby boys be put to death, so that the population would stop growing. When Moses was born, we read in the verse just before our reading from Hebrews 11, that 23 By faith Moses’ parents hid him for three months after he was born, because they saw he was no ordinary child, and they were not afraid of the king’s edict. Later, when Moses became too difficult to hide, he was put in a basket on the Nile River with his family’s prayers that God would take care of him, and Pharaoh’s daughter found him adopting him as her own. Moses spent years enjoying the benefits of living among the royalty of Egypt. He experienced a lifestyle unmatched in his time and something that we still marvel at today.

God was with Moses from the beginning because he had plans to use him. Moses parents risked death in order to save him and the first part of Moses’ life was spent in luxury, but that wasn’t God’s final purpose for him. In our reading from Hebrews 11, we read that 24 By faith Moses, when he had grown up, refused to be known as the son of Pharaoh’s daughter. 25 He chose to be mistreated along with the people of God rather than to enjoy the fleeting pleasures of sin. God gave Moses eyes to see the sin he was living in and his true place as one of God’s people. Leaving Pharaoh’s house meant Moses was going to suffer, but he would not be lost to the brief rewards of sin that eventually lead to eternal punishment. As believers we face different kinds of suffering: we suffer sickness, disease and weakness because the world was broken by sin, we suffer discipline because we choose to sin, we suffer because others sin and do harmful things against us, and finally we suffer because we believe in the one true God and our Lord and Savior Jesus. Moses chose this last kind of suffering when he left Egypt. He chose to suffer mistreatment by being one of God’s people.

The truth is that all of us who are God’s people will face suffering in this life because of our faith. In our reading from Genesis 39, Joseph endured suffering because he was one of God’s people. After being sold as a slave, Joseph became the head servant to one of the Pharaoh’s officials named Potiphar. Potiphar’s wife noticed Joseph and asked him to sleep with her many times, 8 But he refused. “With me in charge,” he told her, “my master does not concern himself with anything in the house; everything he owns he has entrusted to my care. 9 No one is greater in this house than I am. My master has withheld nothing from me except you, because you are his wife. How then could I do such a wicked thing and sin against God?” Joseph would not sleep with his master’s wife, so one day she caught Joseph alone in the house, tried to sleep with him and when he left, she kept his cloak and told her husband that Joseph left it after trying to sleep with her. This landed Joseph in prison, 20…But while Joseph was there in the prison, 21 the Lord was with him; he showed him kindness and granted him favor in the eyes of the prison warden. Joseph did not go against God, and for his faith and refusal to sin, he was put into prison. Like Joseph, we all face situations that tempt us to give into sin, rather than suffer for our faith in God.

Situations surround us each day tempting us to turn away from faith for the brief rewards of sin. For example, by faith I will have to miss out on spending time doing something I want to do, so that I can listen to a pastor tell me something I have heard before. By faith, I can’t use my creative faculties and all the colorful four-letter words I know because God wants my mouth to be clean, speak well of people and used to give him praise, even though my friends will make fun of me for how I talk. By faith, I can’t use my money for everything I want because I am a steward of the gifts God has given me and God wants some of those gifts given to the church to do ministry. By faith, I have to listen to my family make fun of my beliefs and even disown me because I believe the Bible says something different than what they believe the Bible says. By faith, I have to change a relationship with someone I love because God says the way we are living together is not right. These and many more situations surround us all the time and though each of us might be able to do some of these, a couple of them make it sound like we have to give up too much and that life will be too hard.

When what faith calls us to suffer seems too great, Christ is the eternal reward that outweighs the brief rewards of sin. The writer to the Hebrews revealed what Moses gave up by faith, he wrote, 26 He regarded disgrace for the sake of Christ as of greater value than the treasures of Egypt, because he was looking ahead to his reward. Moses experienced the great treasures of Egypt. It wasn’t as if he was walking away from a terrible life from the world’s perspective. Moses walked away from the kind of life many dreamed of having. When Moses left Egypt, he felt the loss. When Moses left Egypt, he did not receive a great reward right away. In fact, Moses did not receive his reward until after he was dead. 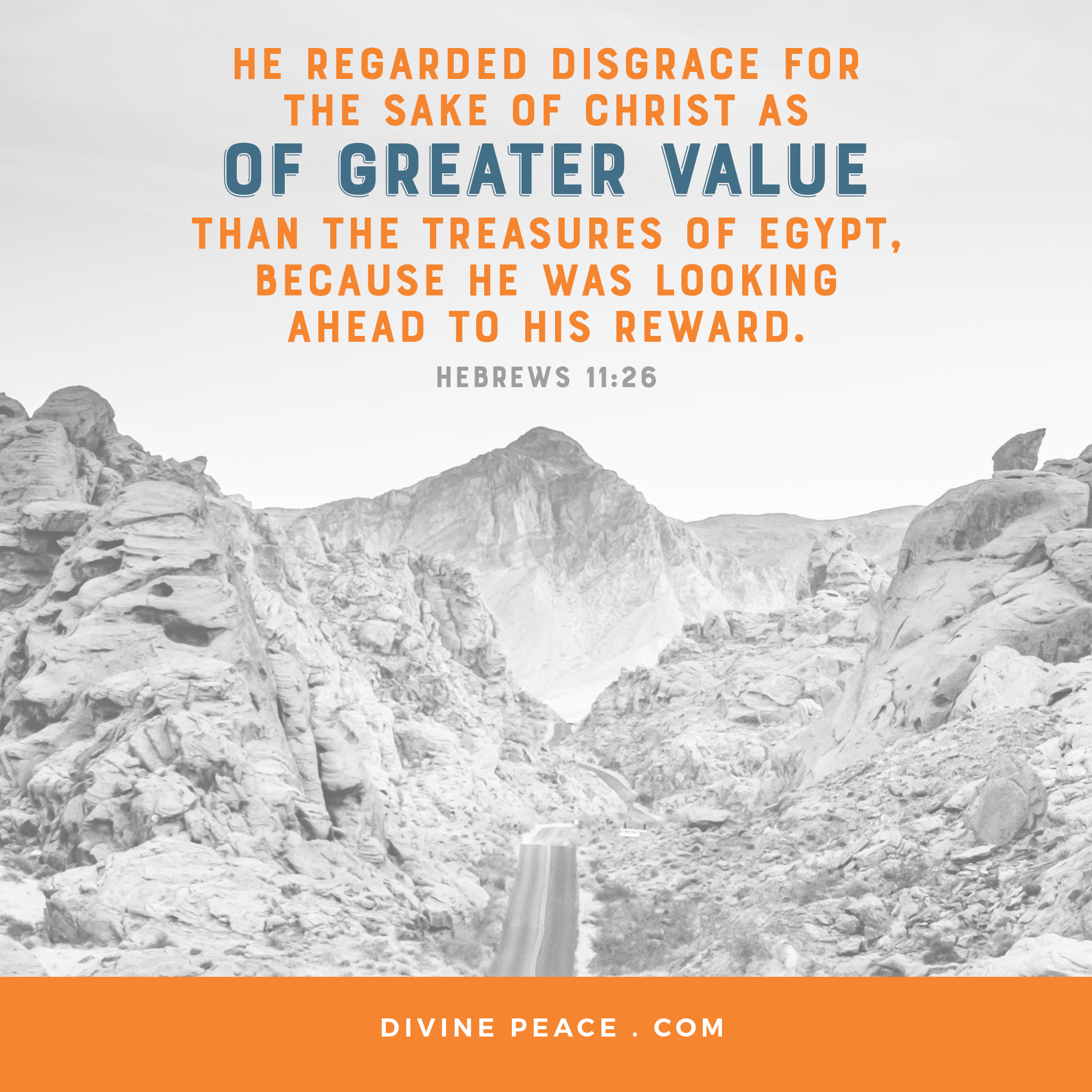 The reward Moses looked forward to is the same reward in which we put our faith. In our gospel reading from Luke 9, Jesus’ disciples confessed that he is the Savior. 22 And he said, “The Son of Man must suffer many things and be rejected by the elders, the chief priests and the teachers of the law, and he must be killed and on the third day be raised to life.” Jesus came as our Savior and to win a great victory over death, but it would only be his after suffering. Jesus was perfectly devoted to God the Father, their desires, words and actions were in harmony, and for that, the sinful world rejected Jesus and put him to death as an innocent man. Jesus endured suffering and death to take our place and save us from our sins. Through his suffering, he earned the right to give us the reward of eternal life in heaven. This reward of eternal life in heaven through Jesus is what we hold on to when we endure suffering for our faith.

It is our faith in Christ that allows us to get through suffering as we hold on to the life we will have in heaven. Jesus was very clear with his disciples about the kind of life all believers will have as his followers. 23 Then he said to them all: “Whoever wants to be my disciple must deny themselves and take up their cross daily and follow me. 24 For whoever wants to save their life will lose it, but whoever loses their life for me will save it.” The suffering we choose to endure because we do not give into the brief rewards of sin by faith are the crosses we carry as Christians. The lie the devil, our sinful nature and unbelieving world wants us to buy into is that the only reward is what is now, right before us and we have to get everything we want out of the relationships, possessions and experiences we have now even if it means sinning against God. The truth is that whatever pleasures we might enjoy from giving into sin do not last, do not satisfy and will in fact have the eternal consequence of hell and therefore, absence of anything good, pleasurable and fulfilling. By faith, we understand that there are things we can enjoy in this world from possessions, people and experiences without giving into sin, suffering will happen and the truly great reward is eternal life in heaven.

People do a lot of things to get relief from the summer heat like going to the pool, lake or ocean. Swimming is a great way to cool off, but you can’t get the same kind of relief from the water you swim in as the kind you get from the facet or a bottle. Sin tempted Moses, Joseph, the disciples and still tempts us today by making us believe its rewards are what we need for relief, but sin does not satisfy, and it does not save us. Jesus was tempted on our behalf and did not sin so that he could save us through his sacrifice on the cross. Our faith in him assures us of our reward in heaven and allows us to endure suffering. By faith in Christ refuse sin’s brief reward and hold on to your eternal reward in Christ. Amen.