16 But not all obeyed the gospel. For Isaiah says, “Lord, who believed our message?” (Isaiah 53:1) 17 So then, faith comes from hearing the message, and the message comes through the word of Christ.

Today we installed the officers of the Divine Peace Executive Committee. Over the past years this group has met in order to strategize how we can best use the time, talents and treasures of God’s people at Divine Peace.  We talk about vision, ministry, and resolve to accomplish these things under God’s gracious hand and blessing.  However, you’re probably familiar with making resolutions to get things done, very often they fail. They often reflect the same thing that people experience when they make New Year’s Resolutions.  If you’re not aware, here’s a summary: Most people don’t keep them. Approximately 80 percent of people who make New Year’s resolutions have dropped them by the time February rolls around (www.inc.com).  So why is it that people can’t reach their goals?

What may surprise you is that the problem usually doesn’t lie with the goals we set. Whether it’s a small, seemingly easily achievable goal or a huge, life-changing goal, people tend to fail at the same rate.  While it is obviously harder to achieve a BIG goal than a micro-goal, the difficulty of the goal you set isn’t nearly as important as whether or not you create the right process to achieve that goal—and whether you follow the process you create.  Otherwise, you’re just wishing and hoping. You have great intentions, but without a real plan to follow… your chances for success are almost nonexistent.  Which is why the very first thing you should do after you make a New Year’s resolution — or after you set any big goal — is to create a process that will allow you to actually achieve your goal. In short, don’t make your goal your New Year’s resolution. Make your plan your New Year’s resolution. Do that, and you’ll succeed where so many others fail.

But, we’re not here this morning to talk about New Year’s Resolutions that often end up as merely hopes and dreams, or even human resolution for a better life, or for meaning for life, or for purpose for your life, or a destiny beyond who I am now.  Dear Christian friends, the Bible has the answer for us in today’s Word before us in Romans 10.  It proclaims

Another Gift From God:  Faith That Cannot Fail

Resting on the Lord

Go in for a job interview. Try to make friends at school.  Figure out a new life style change for better health.  No matter who you are, who you have been, or who you who you want to become as a child of God, we need something better than a New Year’s Resolution or chipper optimism. That something is FAITH that rests on the Lord.  And if you were a six-year-old boy who prayed with bold faith for a new shiny red bike, you might think it is an overstatement to say that faith cannot fail. Can it still be true that faith does not fail when you didn’t make the cheerleading squad, or your college degree didn’t land you with the job of your dreams, or your investments have not provided a care-free retirement? Then what do you make of Paul’s confident statement, 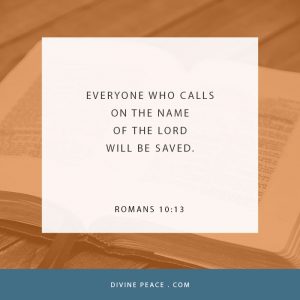 “13 Yes, “Everyone who calls on the name of the Lord will be saved.”

Does this bold statement stand in light of all the other bold trust we have all around us that fails?

“Everyone” is totally inclusive of all people; it doesn’t make any difference how many degrees or friends or teeth you have.

is an activity that any human being can do.

“the name of the Lord”

identifies the object of faith with a specific identity: the Lord God who can do all things.

To be clear, faith in the Lord and what he promises cannot fail.  You can believe all you want about your team making the Super Bowl, but if the Lord doesn’t promise it then it’s not the kind of faith the Bible talks about.  The faith the Bible talks about is the faith that focuses on the one totally trustworthy object—The Lord!  The ones who do the believing can be all sorts of colors, shapes, and sizes.  We can behave in all sorts of ways, have broken our promises or kept them, but what makes a great faith is not how much a person believes or how well a person believes, but in whom a person believes: the Lord!  You can have a battery in your flashlight and have a great faith that it has power, or a little faith that it has power.  But, what matters when you flip the switch?  That it has power!  Here is the promise of God that is a gift that cannot fail for it is resting on the Lord’s powerful promise:

“13 Yes, “Everyone who calls on the name of the Lord will be saved.”

The gospel lesson for today helps us understand this point. It wasn’t wrong for the disciples to work hard all night fishing because they trusted they would catch some fish. We might even make this a spiritual comment by saying they had God’s promise to provide for all our needs. So, they didn’t lie down all night on the ground with their mouths open waiting for food to fall from heaven. They went to work and fished for a living, trusting that God would grant them fish as food and income. But, it would have been wrong for them to continue to fish their way after Jesus told them,

“Put out into deep water, and let down the nets for a catch”

They had fishing expertise, but it would have been wrong for them to trust in their fishing ability (or lack thereof) instead of trusting in Jesus, who made a specific command and promise. So, their faith received what God had promised and offered. Their faith rested on God’s promises that did not fail.

So, where have you been fishing? Maybe your fishing to feed your faith in waters that are contaminated with bottom feeding fish.  Maybe you’re following someone other than Jesus because Jesus wasn’t leading you where you wanted to go? Maybe you’ve created hopes, dreams and resolutions only to find them smashed and then you blame God, who never made that specific promise to you? So, let’s remember this important thing about Faith the Never Fails.  It never fails because of whom it rests. Then with confidence in God’s promise we can reach out to others about leaning on God’s gift of Faith that Cannot Fail as the Holy Spirit blesses

St Paul helps us understand the importance of clear communication:

This isn’t rocket science, but I sure can give you an example of what happens when communication fails.   If I had a RAM 1500 pick up truck with the possibility that my cruise control would not turn off either by pushing the brake or manually turning off the system resulting in the truck continuing to cruise down the road, why wouldn’t I take it into the dealership for repair?  Maybe because I don’t see the need.  And why don’t I see the need to go visit the dealer? Because I haven’t heard about the recall.  And why haven’t I heard about this recall for my truck?  Because I haven’t been notified.  And why haven’t I been notified?  Because the post card that I should have received with the notification was thrown away into the trash without me seeing it. Sounds like Communication Complications to me! And if this scenario is repeated with thousands of RAMS on the road it could mean we are driving with the danger of crashing or being smashed into by a RAM driver!  So look out!

So what’s the hang up? Why aren’t there more people in the world running into church in order to receive the blessings of strong faith that God wants them to have from the proclamation of Word and Sacrament?  Why don’t my children appreciate the power of the gospel like I do?  Why are there so many of our own church members who see little value in attending worship regularly as God commands? Sounds like Communication Complications to me!  Unless the communication lines from the Gospel to their ears have been operating as God intended, and they still don’t believe.

“16 But not all obeyed the gospel. For Isaiah says, “Lord, who believed our message?”

Yes, the possibility exists that the rejection of Jesus lies with the individual as it did with the Jews of Paul’s day who heard and refused to believe the Good News of Jesus the Messiah. But, that’s a big assumption when we’re wondering about the lack of faith of someone else.  God is clear when we perceive a lack of faith in others to asses our communication of the Good News to them. Listen again carefully:

If someone doesn’t believe then we must ask ourselves if we have been diligent and clear in our communication of the Gospel to them, how clearly am I sharing Jesus, how clearly am I modeling my faith in Jesus, and how seriously is my church in prioritizing evangelism—that is sharing the Good News with our neighbors?

So, let’s get started right away! Let’s think about clear communication….like a baby. (I have experience in this department now). How many times does a little one hear the words “mommy” or “daddy” before the say “mama” or “dada”?  How many times will that child see the picture of a cow in the book and hear the words “mooo” before they make the sound?  We learn our speaking by our hearing. You get it!

I’m very thankful for the officers of our congregation that have been elected to serve our congregation.  If history repeats itself, I would imagine that we will spend time making strategic plans using the time, talents and treasures of this congregation to proclaim Jesus.  God has given us the process for faith that will not fail by giving us the Gospel in Word and Sacrament.  For when we proclaim Jesus clearly, people will hear.  When people hear they will be exposed to the gospel—the power of God for salvation for all who believe.  Then they can join you to have faith that will not fail because it’s based on God’s promises. Amen!