Get More Than Words

7 Jesus called the Twelve and began to send them out two by two. He gave them authority over the unclean spirits. 8 He instructed them to take nothing for their journey except a staff—no bread, no bag, no money in their money belts. 9 They were to put on sandals but not to wear two coats. 10 He said to them, “Wherever you enter a house, stay there until you leave that area. 11 Any place that will not receive you or listen to you, as you leave there, shake off the dust that is under your feet as a testimony against them.”

12 They went out and preached that people should repent. 13 They also drove out many demons. They anointed many sick people with oil and healed them.

Let’s try a little experiment.  If I asked for a show of hands of those who agreed with me that God’s Word is powerful, living, active, changing people’s lives for time and for eternity, setting them on a course to heaven for Jesus’ sake. So, let’s take all the Bibles on the back shelf and give one to each of you on the way out of church today and you can plant them in strategic places! Starbucks, park benches, front yards, on top of gasoline pumps, apartment lobbies and street corners.  After all, didn’t Jesus say,

What do you suppose would happen? Would people see your strategically placed Bible and pick it up? If they did read it, what page might they open up and read?  Would they understand it? Let’s get the Word out there and let it work! Ok?!?!

Ok, but God had a different way of sharing his Word. Perhaps one of the most amazing things about the way God shares his Word with the world: YOU! He uses you! He uses witnesses! That’s the other thing Jesus said,

“47 and repentance and forgiveness of sins will be preached in his name to all nations, beginning from Jerusalem. 48 You are witnesses of these things.”

You are the witness at the strategic places—Starbucks, park benches, front yards, on top of gasoline pumps, apartment lobbies and street corners.

Maybe this fact has already clicked with you today when you listen to the account from Amos. Just a normal fella called by God to share his Word.  Or maybe when you heard the reading from Ephesian 1 and remembered the pastors, teachers and parents who shared God’s Word with you. God uses his Word to be sure.  But, because of God’s grace we

Get More Than Words!

Something sure clicked with the disciples. They followed Jesus learning, watching, observing, listening to him. But, they were about to all experience a big change on this day!

“7 Jesus called the Twelve and began to send them out two by two.” 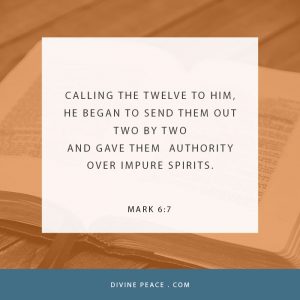 “7 Jesus called the Twelve and began to send them out two by two. He gave them authority over the unclean spirits.”

Last week we heard how cool it is for someone to be healed of a physical ailment, but that this healing is only for this life.  What really matters is that the most valuable part about sharing God’s Word with someone so they can hear, believe and go to heaven. It is good for us to keep this in mind as we think about what is happening here. God gives his disciples specific instructions and required his overseers (pastors) to have specific qualifications. In this context we can then ask the question: “How do these qualification and specific instructions help to share God’s Word?”

The Holy Spirit inspired Mark to record for us:

“He gave them authority over the unclean spirits.”

They could do miracles. This supported their preaching of the Word as Jesus’ representatives. These miracles showed that they did not speak on their own. They spoke for Jesus, the Son of God….who drives out demons and performs miracles.  They could teach what Jesus taught and do the miracles Jesus did so everyone they met would know they came from Jesus. Jesus once told his disciples,

“11 Believe me when I say that I am in the Father and the Father is in me; or at least believe on the evidence of the works themselves. 12 Very truly I tell you, whoever believes in me will do the works I have been doing, and they will do even greater things than these,”

We don’t live in a time where we need these miracles. We have the fully revealed Word of God. In the Bible you can learn the complete account of God’s plan of salvation for you. That’s different for us than for the disciples who had no Bibles to carry around. But, what isn’t different is that just like the disciples, Christians today are the witnesses of Jesus Christ to the world.  Therefore, as we witness about Jesus to the world we use his Word, but let’s not stop there. Jesus wants us to share his Word, but he also wants our character, attitude and actions speak loudly as well.

What does this look like? When I’m tempted to be afraid because my family is in trouble, my work is frustrating, my health is ill it becomes my opportunity to reflect that power of God in my life. I can mirror the love of God for me by loving and forgiving others. I can reveal the mercy God has on me by being merciful to others.  I can reflect the generosity of God to me by being generous to others. It’s all about God using people to give a testimony to Jesus.

Keep this in mind as we hear Jesus giving his instructions to his disciples.  He uses people, but

You all probably watched with interest when the rescuers worked tirelessly to save those soccer players trapped in the tunnels.  We are so appreciative of those Navy Seals who swam long distances to save them. Can you imagine how they geared up when they got the call to go and rescue these people?  Now, listen to Jesus’ instructions:

“8 He instructed them to take nothing for their journey except a staff—no bread, no bag, no money in their money belts. 9 They were to put on sandals but not to wear two coats.”

Doesn’t sound like they were supposed to gear up like Ghostbusters for the job, does it? Instead, Jesus simply says,

When you read this doesn’t it seem kinda like, Huh? What does this have to do with witnessing? This seems like a pretty small detail for us to know about the disciples’ job.

But, that’s the very point. Being a witness of Jesus is so important and so valuable that the little things do matter! Would you recommend that a witness of God’s Word be greedy, worried about his possessions all the time, talking about Jesus one minute and then how he needed money for all the stuff he wanted the next? Doubt it!  And I’m not saying that you and I will never live a perfect, greedy-less, anger-less, life. Our perfection is received.  Jesus took the payment we owed for our sins to the cross and paid for them there. Then we love to hear the Good News that Jesus gives us the holiness we need to enter into heaven. Our perfection is not gained, it’s simply received.

They were not to fret about tonight’s resting place or tomorrow’s meal.  They were share the gospel, not worry about their purses.  Jesus called them to trust in him to provide what they needed along the way. He didn’t call them to be lazy along the way, but to trust in him. They were to proclaim the Word and those who heard the word would be so moved by the love of God for them, they would in turn show their appreciation for hearing God’s Word to support those who proclaimed it. God’s preachers focus on the Word, not the wealth.

There would be blessings promised by Jesus

. “10 He said to them, “Wherever you enter a house, stay there until you leave that area.”

Can you imagine if I was bouncing from house to house?  You know, staying with you until someone with a bigger house, better food, more comfortable bed came along?  Yuck! You would say, “Here is someone who says “It doesn’t matter who you are, Jesus died for you” and then by his life said, “It matters who you are.  I’ll give you better treatment!” This isn’t consistent with the Word so it becomes important as a part of proclaiming that word and avoiding a hindrance.

Then comes a warning,

“ 11 Any place that will not receive you or listen to you, as you leave there, shake off the dust that is under your feet as a testimony against them.”

Maybe you’ve wrestled with this question a lot.  How many times do you go back to a person and plead with them to return to the Gospel in Word and Sacrament, but they don’t. How many times do I knock?  Text? Bring up the subject of Jesus with people who really aren’t asking for advice? The Word is serious.  To reject God’s Word is to reject God. Therefore Jesus is giving one last warning to those who are placing their salvation in jeopardy. You are called to be Jesus’ witnesses to call them back to repentance and faith.

To be sure Jesus sent his disciples out to be his witnesses with his powerful word.  He also gave them his promises to care for them so they didn’t have to worry about their purses. Then we get to hear the results.

“12 They went out and preached that people should repent. 13 They also drove out many demons. They anointed many sick people with oil and healed them.”

Did you hear what happened?  It happened! Jesus blessed what they did. Jesus’ power worked. They drove out demons, healed people and survived because Jesus blessed their work according to his promises.

Dear friends, I really don’t want to lose all the Bibles off the back shelf today.  We need them here to read, feed our souls, and recharge our spiritual batteries. But, in a few minutes we are going to pray the Lord’s Prayer. We will pray, “Your Kingdom Come.”  It is a prayer asking God to rule our hearts and the hearts of our neighbors.  The way Jesus rules our hearts is through his Word. The way Jesus will rule in the hearts of other is not through your purse (although I costs money to run a church) but through your voice as you bear witness to Jesus at Starbucks, park benches, front yards, on top of gasoline pumps, apartment lobbies and street corners. Get Jesus’ Word out there! And to do it, you Get More Than Words.  You get the people in here, in your church, your family to share it with people more and more as Jesus blesses it.  Amen!