Give thanks to your God who battled to give you the promised land!

5 Then you shall declare before the Lord your God: “My father was a wandering Aramean, and he went down into Egypt with a few people and lived there and became a great nation, powerful and numerous. 6 But the Egyptians mistreated us and made us suffer, subjecting us to harsh labor. 7 Then we cried out to the Lord, the God of our ancestors, and the Lord heard our voice and saw our misery, toil and oppression. 8 So the Lord brought us out of Egypt with a mighty hand and an outstretched arm, with great terror and with signs and wonders. 9 He brought us to this place and gave us this land, a land flowing with milk and honey; 10 and now I bring the firstfruits of the soil that you, Lord, have given me.” Place the basket before the Lord your God and bow down before him.

Picking the best weapon depends on the battle. In Star Wars, you might want a light saber. In a superhero movie, you might want the strength of Hulk or Thor’s hammer for Marvel and everything Superman has for DC. In war, you might want the fastest jet or drone with the biggest bomb. When you are a kid, the best weapon might be your imagination or mom and dad. In business, it might be a power suit or boots that make you a little taller. In business, it might also be a Kendra Scott earring, necklace and bracelet combo with a Cabi jacket and Michael Kors handbag. If you want to know the best weapon, it’s going to depend on the battle. In our Old Testament reading from Deuteronomy 26, God reminded a new generation that he had battled with his strong our through the ten terrifying plagues to bring their parents out of slavery to get them to the promised land. God also fought to give us the promised land of heaven and today we are reminded to Give thanks to your God who battled to give you the promised land!

Deuteronomy was the last book written by the prophet Moses. Moses was inspired by God to write the first five books of the Bible recording the events of creation up to God’s people preparing to enter the promised land 1400 years before the birth of Jesus. By the time the events of Deuteronomy happen, the Israelites had wandered forty years through the wilderness as punishment for not believing God forty years earlier when he told them they would be able to defeat the people already living in the promised land, the land of Canaan. During those forty years, all those twenty years and older died as punishment for their lack of faith, never to see the promised land. In order to avoid another falling away from faith in God, Moses took the time to restate all of God’s promises for this generation as they now stood ready to cross into the promised land again. They needed to be reminded that just as God had delivered them from Egypt, he would fight for them to enter the promised land. While reminding the people of God’s power, he also reminded them of his commands. In this section from Deuteronomy 26, Moses was at the end of the section on God’s three different types of laws. First, God gave the moral law, summarized by the Ten Commandments. Then, he gave the ceremonial laws regarding sacrifices and the temple. Finally, he gave the civil laws that people were to govern themselves by as a nation.

Deuteronomy 26 comes out of the section about giving firstfruits and tithes. It outlined what the people were to give back to God at the time of the harvest. They were to give

2..some of the firstfruits of all that you produce from the soil of the land the Lord your God is giving you.

The people were to bring the first of their harvest to show that they trusted God would continue to keep their harvest coming. Giving their offerings to God also showed they trusted in him to provide a good harvest, rather than giving an offering to the local fertility gods of the people around them. When the Israelites came to give their offering, they were to make it clear who they were giving the credit to and thanks for their harvest. When they brought their offering to the priest, Moses told them to retell the history of Jacob and his twelve sons who came to live in Egypt. The twelve sons who then became the great nation of Israel and, as they grew in numbers, caused the Egyptians to be afraid of them, so the Egyptians enslaved them. But, they were to say,

7 Then we cried out to the Lord, the God of our ancestors, and the Lord heard our voice and saw our misery, toil and oppression. 8 So the Lord brought us out of Egypt with a mighty hand and an outstretched arm, with great terror and with signs and wonders.

On Wednesday, we began the season of Lent with Ash Wednesday. We go into this season after Jesus revealed his power to us in the season of Epiphany. Now in Lent, Jesus uses his power to resist temptation, endure suffering and sacrifice his life on the cross as our Savior. In other words, Lent is about what Jesus gave up for us, not what we give up for him. Does that mean we don’t have to give something up for Lent? Yes, at the same time, now is the time for you to give something up. What I mean is that Lent is not about ordering a filet-o-fish instead of a Big Mac or trying to give up sugar in the middle of March because it didn’t work for your New Year’s resolution. Instead, Lent is about what God has done for us, so if you are going to give something up, give up a sin. Identify some temptation in your life and work to get that situation, person or thing out of your life so that you can serve God as his child and not as a child of this fallen world. Also, to be clear, this desire to give up something sinful is not just for the forty days of Lent but it is our attitude everyday as a believer.

What we choose to give up for God reveals what is in our hearts. When God asked the Israelites to give him the firstfruits of their harvest, it was a sign of their faith. It wasn’t as if God needed fruits and vegetables to build his strength back up to keep fighting for the Israelites. God wanted his people to have a way to show their thanks and trust in God, a way to worship him. And the same is true for us today, as Paul wrote in Romans 12:1,

Therefore, I urge you, brothers and sisters, in view of God’s mercy, to offer your bodies as a living sacrifice, holy and pleasing to God—this is your true and proper worship.

God still wants us to give him something, but now that the physical nation of Israel is gone along with the civil laws about firstfruits and tithes, the way we give is how we live. Our whole self, body, soul, thoughts, words and actions, possessions, time and unique gifts all can be used to give thanks to God as a reflection of our faith or they can not give thanks to God as a reflection of our love for the world. So, the real question we have to ask ourselves for Lent is not, “What are we going to give up,” but, “How can I give thanks to God every day for what he has given me?”

So often we get wound up in what we need to do for God, even as believers who know God has done it for us. We forget that not only has God saved us through Jesus and given us faith through the Holy Spirit, he also gives us the desire to turn from sin to serve him and the weapon to battle against turning away from him.

We don’t lose anything when we give up something for God because we already have all we need from him. In the past, God changed the lives of the Israelites by bringing them to the physical promised land of Canaan. They no longer had to suffer as slaves in a foreign land. They had it all from God as Moses reminded them,

9 He brought us to this place and gave us this land, a land flowing with milk and honey. 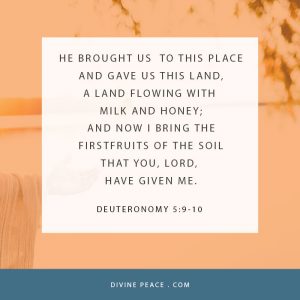 With confidence in God, they could stand before him and say,

10 and now I bring the firstfruits of the soil that you, Lord, have given me.”

When the people brought their offerings to God, they recognized he gave them the ground they lived on and its fruits. We give with the same attitude as the Israelites. We give up our time during the week to hear God’s Word, pray and are there for one another in Christian love. We use our talents to make music, clean, cook, advertise, teach and organize events for our church. We give a portion of our income, maybe 5, 10 or 15 percent, to the church. We ask questions, listen and care about our church community and local community by sharing the Word of God with them.

We are able to give back to God without fear because Jesus battled to save us. In our Gospel reading from Luke 4, we read that

1 Jesus, full of the Holy Spirit, left the Jordan and was led by the Spirit into the wilderness, 2 where for forty days he was tempted by the devil.

A quote from Deuteronomy 6:16. The devil battled against Jesus, but Jesus remained faithful to God. Jesus lived his whole life perfect and sinless to offering his life for us on the cross. He battled for our lives and won them back, to earn the right to say in John 14:1-2

“Do not let your hearts be troubled. You believe in God; believe also in me. 2 My Father’s house has many rooms.”

All the rooms of heaven, the promised land, are open and ours through Jesus.

These verses reveal the intimate connection between the faith in our heart that saves us, and our faith expressed in our words that save us. As believers, our faith is in our hearts and in our words. Israel had neither when they did not trust God to battle for them to enter the promised land, but Jesus had both when he battled for us. When Jesus battled the devil, he did not battle with physical force to defeat the devil, but his Words. And we must battle the same way as Paul wrote in Ephesians 6:12,

Picking the best weapon depends on the battle. Our greatest battle is against the devil and sin pulling us to live with an ungrateful heart that turns away from God and falls back in love with this world. The weapon we have against falling away from God is his word. It’s not the word itself, but that it tells of what God has done for us. It reveals that God fought for us and he gave his first, best and only Son to save us. God himself is the greatest weapon of all time. He is useful in all the battles we face. And he has won the war for our souls. So, for the forty days of Lent and every moment until you reach heaven, give thanks to your God who battled to give you the promised land! Amen.