God Speaks the Language of Love!

Now the whole world had one language and a common speech. As people moved eastward, they found a plain in Shinar and settled there.

They said to each other, “Come, let’s make bricks and bake them thoroughly.” They used brick instead of stone, and tar for mortar. Then they said, “Come, let us build ourselves a city, with a tower that reaches to the heavens, so that we may make a name for ourselves; otherwise we will be scattered over the face of the whole earth.”

But the Lord came down to see the city and the tower the people were building. The Lord said, “If as one people speaking the same language they have begun to do this, then nothing they plan to do will be impossible for them. Come, let us go down and confuse their language so they will not understand each other.”

Only one person is happy after a game of Monopoly. If you’ve ever played the game of Monopoly, you know the point is to get as much real estate as you can so that your opponents have to pay you higher and higher rent until they are bankrupt. At least for me and my family growing up, the game often ended with more sadness than smiles. In the real world too, the game of monopolies leaves more people frustrated than financially sound. In the United States, at the turn of the twentieth century Standard Oil had a monopoly in the oil industry leading the government to create the Sherman Act of 1890, the Clayton Act of 1914 and the Federal Trade Commission Act of 1914 in an effort to breakup and prevent monopolies from hurting the economy. Today, it looks like this legislation is going to be used against some large tech companies, and if you want to know which companies just Google it after the sermon. Monopolies often harm far more people than they help, and in our reading this morning from Genesis 11, we see God broke up the first harmful human monopoly at the Tower of Babel. And more than that, we will see how in response to our own harmful sinful nature, God speaks the language of love.

God’s language of love looked more like tough love to the people involved in the first harmful human monopoly. In the ten chapters of Genesis before our reading from Genesis 11, God revealed his love is both tough and tender with words of judgment and mercy. When God created the world, it was good, but Adam and Eve turned away from the good things God wanted for them. God spoke judgment against Adam and Eve for their sin, but God also spoke words of mercy to them promising that one of their offspring would save them and crush the devil’s head.

In time, most of Adam and Eve’s children, grandchildren, great-grandchildren and so on forgot God’s promise leading humanity again into chasing after false promises and evil. As judgment against the harmful, unbelieving world, God sent the flood, cleansing creation of unbelievers, leaving only eight believers: Noah, his wife, their three sons and their wives alive and protected in the ark. After they came out of the ark, God continued to show them mercy as recorded in Genesis 9:1 Then God blessed Noah and his sons, saying to them, “Be fruitful and increase in number and fill the earth.” God’s command was good and filled with love, but again the good he wanted for the world would be rejected by mankind.

The generations following Noah and his family decided not to follow God’s commands. In our reading from Genesis 11, we read that there was only one language and as the people moved eastward, they found a fertile valley. When the people discovered the fertile valley, they stopped and decided to gather together the best building materials they had at the time. 4 Then they said, “Come, let us build ourselves a city, with a tower that reaches to the heavens, so that we may make a name for ourselves; otherwise we will be scattered over the face of the whole earth.” The conversation going on between the people revealed their total disregard for what God wanted for them. God told the people to spread out, but they discussed plans to stay in one place. God wanted them to trust in him for life and protection, but they talked about being immortalized and secure in their little city. The people failed to remember what happens when plans are made that go against God. In response to their plans, God was going to humble them with some tough love.

You could call the Tower of Babel the first harmful human monopoly. The people believed they were going to be the happy winners if they made this tower reaching toward heaven, but no matter what they might have built it would not have brought them what they wanted. The same is true today. Look out across the lake and look at the tallest buildings in Dallas, they are not churches. The many tall buildings around us point to the conversations dominating our world. The world enjoys the power of money, the promises of medicine and the prowess of sports, but God would have us use our money as good stewards to help others, medicine to cure disease rather than cut short a life and athletic abilities for his glory alone.

As believers, our lives are a struggle between building the tower and blessing the earth. On the one hand, we know that our hearts were once lost to sin, completely focused on building our own Tower of Babel at the center of a city with our name on it. On the other hand, in our baptism, God drowned that sinful nature, washed away our sins and brought to life a new person eager to serve him and the world in love. We now live with these two natures at war within us. We are pulled away from serving God’s kingdom by our sinful nature to return to our city. We are pulled to return to its dark places, to doors and rooms we’ve hidden from the rest of the world, things hidden in our phones, pantries, at work or at play that allow us to indulge our sinful desires, all the while keeping the outer walls and tall tower of our cities looking clean and well put together.

When the arrogance of our harmful sinful hearts denies the need for God’s forgiveness pointing to our sparking towers or when we are overcome with how much time we have put into our own sinful cities, God speaks the language of love. The tough love of God’s judgment meant for us as sinners was carried out against Jesus on the cross to save us from our sins. Through Jesus, God revealed his mercy to us treating him as our sins deserved. In Ephesians 2, Paul wrote, 4 “But because of his great love for us, God, who is rich in mercy, 5 made us alive with Christ even when we were dead in transgressions—it is by grace you have been saved.”

By God’s grace, he saved us and he sends the Holy Spirit to give us faith in Jesus as our Savior. The Word of God reveals Jesus as the Savior of the world, but without the Holy Spirit, those words fall on deaf ears. God must be the one who works on our sinful hearts to rescue us from death and unbelief. This means God will use tough love to show us our sins, so that he can show us our Savior. 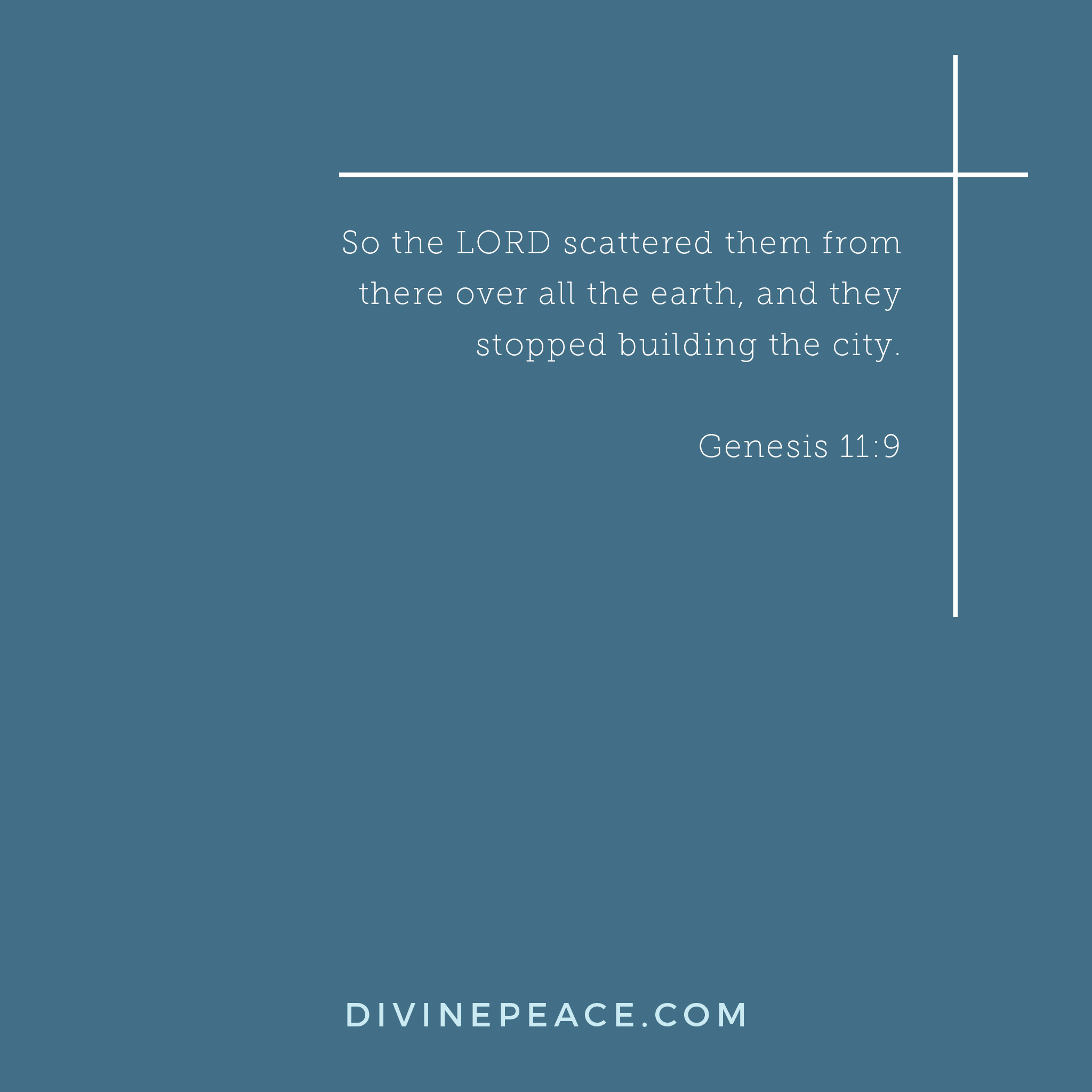 In our reading from Genesis 11, God revealed that he confused the one common language of the people building the Tower of Babel so that they would not understand each other and not be able do even more impressive things together all so that they would remember their need for God. In the end, no tower would save them from sin, no city wall would be able to contain the whole world and not one of their names written at the entrance to the city would mean anything if they were dead. Instead, God confused their languages sending them all over the world.

Today we celebrate Pentecost and the coming of the Holy Spirit. In our reading from Acts 2, the Holy Spirit came in a miraculous way to allow Jews to hear the apostles tell them what Jesus had done for them in their own languages. Peter explained the miracle as a fulfillment of what God spoke to the prophet Joel, Acts 2:17 “In the last days, God says, I will pour out my Spirit on all people. 21 And everyone who calls on the name of the Lord will be saved.” The Holy Spirit allowed two miracles at Pentecost. One, the people heard the word of God in their native language. Two, the Holy Spirit brought about three thousand to faith that day. And the Holy Spirit continues his miraculous work in us today.

A few days ago, the world remembered June 6th as D-Day. It is a day celebrated as the great turning point in World War II to liberate German occupied France and then the rest of Europe. The day commemorates tough love as many human lives were sacrificed and taken in order to prevent the loss of even more lives and end the war. It is important to remember days like D-Day so that horrible moments in history might not be repeated. The love God showed to us through Jesus also must be repeated to us and to everyone in the world so that lives are saved. In our gospel reading from John 15, Jesus said, 26 “When the Advocate comes, whom I will send to you from the Father—the Spirit of truth who goes out from the Father—he will testify about me. 27 And you also must testify, for you have been with me from the beginning.” The Holy Spirit speaks to our hearts and gives us peace. The day of Pentecost, Jesus’ promise to send the Holy Spirit and the Tower of Babel all point to God speaking the language of love to us. If you are anxious about anything in your life listen to God’s Word or ask someone who knows it to share it with you. The Holy Spirit will help you and make you sure of your place in the heavenly city of God with Jesus at its center.

When we play at monopolies this side of heaven whether on a board or in real life, more often than not, it leaves families and finances frustrated. When God breaks up the monopolies that we try to hold on to it feels like tough love, but when the Holy Spirit works on our hearts to show us our sins, he does it to show us our Savior. When the only thing we had to our names was sin and death, Jesus traded us forgiveness and life. The Holy Spirit makes us sure of what happened on the cross and of the empty tomb, and this hope in Jesus is our testimony as we speak to our friends, family and community. God bless us and fill us with peace by the power of the Holy Spirit because God speaks the language of love. Amen. 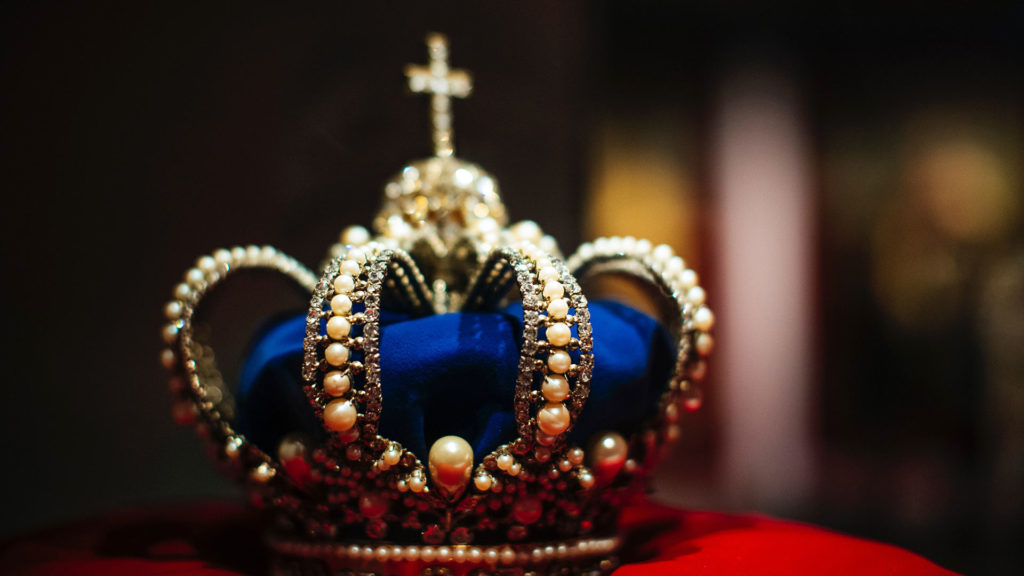