Jesus Brings Life! You Can Bank On It!

8 So do not be ashamed of the testimony about our Lord or of me his prisoner. Rather, join with me in suffering for the gospel, by the power of God. 9 He has saved us and called us to a holy life—not because of anything we have done but because of his own purpose and grace. This grace was given us in Christ Jesus before the beginning of time, 10 but it has now been revealed through the appearing of our Savior, Christ Jesus, who has destroyed death and has brought life and immortality to light through the gospel. 11 And of this gospel I was appointed a herald and an apostle and a teacher. 12 That is why I am suffering as I am. Yet this is no cause for shame, because I know whom I have believed, and am convinced that he is able to guard what I have entrusted to him until that day.

13 What you heard from me, keep as the pattern of sound teaching, with faith and love in Christ Jesus. 14 Guard the good deposit that was entrusted to you—guard it with the help of the Holy Spirit who lives in us.

According to the US Mint, there are currently 147 million ounces of gold in Fort Knox, KY.  At a current price of about $1776 per ounce, this is worth $260 billion dollars. This comes very short of getting the US out of its $21 trillion national debt – the gold holdings are worth less than 2 percent of the US Public Debt.  But here is the rub: even if Fort Knox held all the gold ever mined in the world, estimated at 185,000 tons, at current prices this would be worth only 11 trillion dollars, still only about 50% of the national debt.  Think about this: if all the Fort Knox gold was cashed in, it would probably cause a drop in gold prices for a short while, while putting a minor dent in the national debt that would be completely erased by next year’s deficit spending.

So, why all the fuss about guarding all the gold at Fort Knox in Louisville, Kentucky? There are layers of guards, Army, Fences, and concrete walls, multiple surveillance systems and machine guns. It sure seems like there’s something in there that’s worth guarding…and so did the Apostle Paul while he was in prison. Yes, this is Paul’s second visit to Rome and he’s not under house arrest this time. Now he was in prison for real when he wrote to Timothy,

“6For I am already being poured out like a drink offering, and the time for my departure is near”

So, what could he possibly have in such a dirty, dark, rat infested place like this to guard? A hunk of sausage? Moldy bread? A metal file in order to saw away at the jail bars and plan his escape? No!  He had something to guard worth more than all the gold at Fort Knox.  Paul was called to faith in Jesus, whom he saw with his own eyes, and knew that Jesus “brought life and immortality to light through the gospel, and he wanted his protégé, Timothy, and you and me to know it, too:

Jesus Brought Life!  Bank on it!

I don’t think there is anyone here who would argue that “life if precious.” If you’ve ever run into someone who had nearly lost their life in a car crash, sickness, or catastrophe they would tell you, and probably show you that they believe life is precious. But, do you? The reason I ask is based on some common stats. If we are honest with ourselves, do we really care about life? For instance, we see pictures of starving children (part of the billions of people that are living on less than $1.25 per day) while we lounge around playing internet games, sharing memes, crying when our favorite football team loses, doing drugs and alcohol while complaining that life sucks and is meaningless!  Do you believe life is precious? No matter how big your house—someday it will need repairs. No matter how much make up—wrinkles are coming. No matter how many movies—the stars will fade away. So, what makes life truly precious? How about relationships? Not just people you meet on the street, but loving, caring relationships! That’s why tears flow having to say good-bye after visiting family, or when you hear that you have a bad sickness, or your spouse is going to have to travel for their job, or at funerals…. or stuck in prison,

“That is why I am suffering as I am.”

Relationships with people are precious. And Paul was separated and faced the ultimate divider—death!

We all know where death came from. It’s been passed down since Adam and Eve, deservedly so, to all of us to be separated from God, now through spiritual death, and eternally for all who reject God. Yet, we stand warned—one lie, lust or one slap in God’s face breaks the relationship we had with God. Death could have been the end of our story, but it isn’t. Jesus changed all of that. 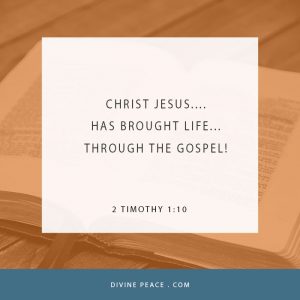 “10 but it has now been revealed through the appearing of our Savior, Christ Jesus, who has destroyed death and has brought life and immortality to light through the gospel.”

Jesus suffered separation from God while on the cross suffering the eternity of hell in our place. Jesus paid the penalty of our sins so we wouldn’t have to. That’s Paul’s confidence: Jesus brought him life:  And Paul banked on it!

This was the “gold bar” alongside Paul as he sat in prison. Paul could remember the promises of Jesus being whispered in his heart,

“[I’ll guard your eternal life, your eternal relationships with God.] Shall trouble of hardship or persecution or famine or nakedness or danger or sword [separate you from the love of God? No!]

Jesus was Paul’s Fort Knox. Jesus guarded the gift of life with God even while Paul suffered in the dark cells of prison. Jesus brought life and Paul banked on it!

You’ve heard people say, “I feel so sorry for the next generation” and in the corners of their hearts may even be looking forward to their own retirement. Paul wrote this letter to young Timothy, the future seminary president and pastor trainer in Ephesus. The world was unsure, the government was making anti-god decisions and he probably struggled with the thought of showing gay people compassion, helping them find a way to control their urges and abstain from sinful behaviors. He was probably searching for meaningful roles for the women and how to train the leaders in the church.  So, Paul wrote,

“8 So do not be ashamed of the testimony about our Lord or of me his prisoner. Rather, join with me in suffering for the gospel, by the power of God. 9 He has saved us and called us to a holy life—not because of anything we have done but because of his own purpose and grace….12 That is why I am suffering as I am. Yet this is no cause for shame, because I know whom I have believed, and am convinced that he is able to guard [what has been entrusted to me] until that day.”

Paul knew Jesus was guarding him and he shared this promise with Timothy: Jesus brought life; You can bank on it! Therefore

By this time in Paul’s life it appears he was down to the clothes on his back. At the end of his letter to Timothy he wrote,

“9 Do your best to come to me quickly, 10 for Demas, because he loved this world, has deserted me and has gone to Thessalonica. Crescens has gone to Galatia, and Titus to Dalmatia. 11 Only Luke is with me. Get Mark and bring him with you, because he is helpful to me in my ministry….13When you come, bring the cloak that I left with Carpus at Troas, and my scrolls, especially the parchments.”

Paul sounds lonely and sad, but he still clung to something like a woman with a purse of money walking down the streets of New York, having just been warned by the police of pick-pocketers and thieves. Paul was guarding the gift of Jesus and his relationship with God that was deposited into his heart outside of Damascus. Paul was willing to lose his earthly things at the expense of keeping his “gold bar” of eternal life in Christ Jesus.

As Paul encouraged Timothy, so are we also encouraged to remain bold!

“13 What you heard from me, keep as the pattern of sound teaching, with faith and love in Christ Jesus. 14 Guard the good deposit that was entrusted to you—guard it with the help of the Holy Spirit who lives in us.”

Just so we’re all clear!  Jesus, our all-powerful God needs no guarding. But, that isn’t to say his reputation can’t be tarnished or ignored by people. So, how did Paul, Timothy and us too, how can we guard “gold bar” of Life that Jesus has given to us? Unlike Fort Knox, the best way to keep it, is to give it away! Sounds strange until you hear Paul,

“11 And of this gospel I was appointed a herald and an apostle and a teacher.”

How can opening up the doors of Fort Knox and sharing gold bars guard them?  It can’t.  But, that’s the way to guard the life we have in Christ.  For instance, if you join me in doing evangelism visits you might get asked a question for which you don’t know the answer. Doesn’t that drive you back to God’s Word to learn the answer? So, what happens when you find yourself returning to God’s promises, but that you’ll know them even better than before.!

“do not be ashamed of the testimony about our Lord.”

We want all people to know that Jesus brought life and they can bank on it!

If you were the daughter of Jairus you would. You see, 38 years after Jesus raised her from the dead she would have celebrated her 50th birthday. Very likely she would be then holding the hand of your 20-year-old son while they looked into the casket of Jairus. What do you suppose she could have told her son? “Go ahead and cry.  I miss your grandpa, too. But, tomorrow and the next day we will smile because Jesus brings life.  As surely as Jesus brought me back to life he will bring Grandpa and all the rest of the believers to life to live with him in heaven forever. This is not, “Good Bye! Grandpa,” but “See you later, Grandpa.”  And if Jairus’ daughter was standing here today she would tell you, “Jesus Brings Life.  You can bank on it!”  Amen!