Know the Truth of Jesus’ Kingdom

33 Pilate went back into the Praetorium and summoned Jesus. He asked him, “Are you the King of the Jews?”  34 Jesus answered, “Are you saying this on your own, or did others tell you about me?”   35 Pilate answered, “Am I a Jew? Your own people and chief priests handed you over to me. What have you done?”

“I will give you, up to half of my kingdom” (Mark 6:23). That’s what King Herod promised to give to the young girl who danced and pleased him at his birthday. That was the temptation of Satan to Jesus on the top of a very high mountain. In both cases the individuals knew their kingdom.  Herod loved to rule the area around Galilee—places where Jesus had become very popular. And Satan – he loved to rule earth and use it to drive people away from God by offering them the sinful pleasures of this world.  It didn’t work on Jesus, though. Jesus always knew his kingdom. He knew what this world had to offer was worthless for one day the sun won’t shine, the moon won’t reflect, the flowers and grasses will shrivels up, the lakes and rivers will smell of stench while every creature that had breath will lay in decay. Jesus knew his kingdom, and this world was not it.

Jesus could have taken great advantage of this kingdom when over 5,000 people were scattered in the fields being fed till satisfied as the patted their stomachs while laying in the grass….kinda like we did after Thanksgiving dinner! The people wanted a way to keep Jesus around, and Jesus could have so easily obliged! But, Jesus saw so much more than stomachs in need of food, he saw the sin that was infecting their hearts and causing a hunger that would never be satisfied by fish and bread. Jesus had to quickly walk away from this crowd.  Jesus knew his kingdom, and this world was not it.

So, how about you?  Do you know your kingdom? Are you easily pleased like Herod?  Are you power hungry like Satan?  What does your stomach crave tomorrow that would make it the best day you’ve had in a while? Do you know your kingdom? Do you find yourself working so hard to fix, improve or gain that your kingdom turns into a crazy, anxious, angry and stressful kingdom? Do you go from one thing to the next?  Is there a frenzy to fix your kingdom that seems so impossible to fix, improve or gain?  I just recently heard, “I just want one thing to go right” and what they really meant to say was, “I just want everything to go right!  I want control of my kingdom!” But, that isn’t going to happen. After the fall, God subjected this kingdom around us to be filled with frustration (holiday plans, marriages, work, relationships, house-painting, …..). You DO know this kingdom, don’t you! And you are less than pleased with it. So, today Jesus wants you to

Know The Truth About Christ’s Kingdom

Jesus knew his kingdom and it showed itself during his life. “Pilate went back into the Praetorium and summoned Jesus.”  Jesus knew his kingdom and this was it! When the 5,000 tried to make him a king, he walked away.  When Satan tried to tempt him to be the world’s emperor, he told Satan to scram. But, when they came to arrest Jesus in the Garden of Gethsemane and put him to death on the cross, this was the kingdom Jesus didn’t refuse!  Jesus saw the curse of sin and the punishment it deserved and had to be paid.  This was Jesus kingdom. Jesus saw hearts of people that would refuse to follow God’s will as revealed in his Holy Scriptures, hearts dominated by Satan’s lies that the people themselves couldn’t overcome.  This was Jesus’ kingdom.  This was the kingdom from which he didn’t hide and didn’t walk away. It was for this kingdom’s sake that Christ the King stood on trial before Pilate.

Jesus had one main concern–

Jesus is not concerned about the kingdom over which Pilate is ruler.  Jesus is concerned about Pilate and wants to be Lord of his heart! Therefore Jesus asks this penetrating question:

“34 Jesus answered, “Are you saying this on your own, or did others tell you about me?”

Pilate knew the Jews were making this claim about Jesus being a king. This beat up, whipped man wasn’t a big concern to Pilate. But, Jesus does turn the small talk that Pilate thinks is important for his kingdom, to what Jesus knows is important for his eternal kingdom!  Jesus had one main concern—to save people and now Jesus was throwing Pilate a life line, and at this point Pilate isn’t interested and refused Jesus’ kingdom. For him, Jesus was only like a shiny object on the ground and Pilate wasn’t interested in bending over to check it out.

“36 Jesus replied, “My kingdom is not of this world. If my kingdom were of this world, my servants would fight so that I would not be handed over to the Jews.”

Yes, Christ the King has a kingdom! It’s just not of this world! And if it were, can you imagine the fight the Jewish leaders would have on their hands as they had to fight Michael the angel from heaven! It wouldn’t be fair. They would need more people!  Now, stop and think of this little truth—“not of this world!” makes all the difference! Let’s say someone hated you and saw you in the parking lot and started to scratch the car with their key, smash the  windows and slash the tires! But, then you say, “That’s not my car.” The enemies of Jesus tied him up and condemned him to death.  The disciples refused to remember Jesus’ words and abandon him.  Satan must have cackled with delight as Jesus carrying his cross to Golgotha. But, Jesus looked at it all and said, “that’s not my kingdom!” Oh, how such words would bring agony to Satan and his followers. Jesus has a kingdom that Satan, this sinful world and those who rebel against his Word can’t touch! Do you get it?  Be very clear! Jesus’ rule and reign of his kingdom does not depend on his living, but on his dying and coming back to life!   So, be very clear, Jesus’ kingdom is safe!

So, how safe is your kingdom? If your kingdom was so safe and secure, I would think you’d have no reason to visit the doctor, have a surgery, get treatments for cancer, right?  If your kingdom was so awesome then you wouldn’t have stress, conflict or issues.  If your kingdom was so safe and sound then your job would be steady, your relationships would all be God-pleasing and other people would value and look up to you. So, let me ask, how much of your life is spent trying to preserve and protect your kingdom in order to keep it safe? Are you ready to admit that you’re like Herod and Satan trying to keep your little kingdom together? Wouldn’t you much rather base your life on a kingdom that is filled with much more confidence?  Then know the truth about Christ’s kingdom and you’ll

Here’s how Jesus talked about it.

“my kingdom is not from here.”

Of course Pilate thought he was on to something…. 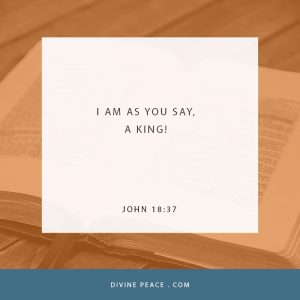 and we’d tell Pilate, “You can’t touch it!” That’s right, Pilate can’t touch Jesus’ kingdom, but, you can. You see, you know all about Christ the King and his Kingdom.  You know how Jesus came to guard, protect, defend and save you from all your sins. Jesus came to die on the cross to pay the sins of you and your little kingdom that you set up for yourself over God’s kingdom. You know, the one compared to yours—the one you set up that says, “I know what’s better for my soul than God does.  So, l won’t read the Bible, l won’t challenge my faith in Bible Class, l won’t be regular in worship, l won’t present myself to the blessings of Jesus through the Means of Grace, but I’ll set up my own little kingdom and pretend that I’m in control. Well, folks, it doesn’t work that way.  Eve can speak from experience and so can I after being the pastor here for 20 years.  I can tell you story after story of folks who made it their business to make Christ’s kingdom their own, and I can tell you story after story of folks who made it their business to make their own kingdom more important than Christ’s.  But, Jesus is so good!  Jesus is so loving that he came to do this! “Jesus answered, “I am, as you say, a king. For this reason I was born, and for this reason I came into the world, to testify to the truth.”

“31 Jesus said to the Jews who had believed him, “If you remain in my word, you are really my disciples. 32 You will also know the truth, and the truth will set you free.”

Jesus says his Word is truth. This is the truth—God’s Word.  Jesus came and set you free from the curse of sin.  Jesus came to die on the cross to pay the penalty of all your sins. Jesus rules all things for the sake of his dear children—those who remain in his Word. Jesus says when you “lose” from your kingdom in this world, that it isn’t his kingdom you’re losing.  For the kingdom of Christ the King is not of this world. It is his kingdom that will last forever.  It is in his kingdom where you have confidence that you know the truth that sets you free.

That’s how this works. Christ the King speaks the truth about his Kingdom and we get to testify to the truth. God’s truth doesn’t change. God’s truth lasts forever. God’s truth is based on facts. God’s truth brings us confidence in Jesus’ Kingdom. The Holy Spirit uses the truth of Christ’s Kingdom to bring us to faith, and by his power, that we might be sons and daughters of the King with a super, awesome Kingdom with Jesus.

“I will give you, up to half of my kingdom” isn’t really much of a promise spoken from a man whose kingdom reached about as far as he could see.  It’s rather humbling when I think about being here for 20 years.  If someone was to count the numbers they would have an argument that it doesn’t seem like Pastor Hering built much of a kingdom—I mean much of a church here.  But, it isn’t about my/your kingdom.  It is about knowing the truth of Christ and building HIS Kingdom.  It is being clear and confident that we will spend eternity with Jesus in his eternal kingdom.  If you really want to share a kingdom with someone, share Jesus’ kingdom—parents with your children, and grandparents with your grandchildren!  For in the end, all that will matter is that we believe in Jesus and the truth about his kingdom. Amen!

Christ Calls for a Change