Live with The Servant Spirit of the King

In your relationships with one another, have the same mindset as Christ Jesus: Who, being in very nature God, did not consider equality with God something to be used to his own advantage; rather, he made himself nothing by taking the very nature of a servant, being made in human likeness. And being found in appearance as a man, he humbled himself by becoming obedient to death—even death on a cross!

Therefore God exalted him to the highest place and gave him the name that is above every name, that at the name of Jesus every knee should bow, in heaven and on earth and under the earth, and every tongue acknowledge that Jesus Christ is Lord, to the glory of God the Father.

There are opportunities for love and forgiveness, patience, sympathy and sacrifice. We usually reserve mentioning these sort of positive qualities at a person’s funeral. Sometimes it’s true, and sometimes not. When it is true we have reason to give thanks to the Lord what a blessing God made that person to be

“In your relationships with one another,”

as Paul says. Now, look around again and think about how many hours we have spent together as a congregation of believers over how many years? We have tons of opportunities for service.  However, it may also be a ton of lost opportunities if we can’t see past ourselves.

So, what does all of this have to do with Palm Sunday? Everything!  While Jesus is the focus of our lives every day, we are now at the first day of Holy Week. The Holy Spirit inspired Paul to write these very important words for us so that we don’t watch Jesus this week like we would watch the history channel. This is our opportunity to focus on Jesus and be reminded of what kind of King we have fighting the battle for our eternal souls during Holy Week. So, grab some fresh palm branches of service and selflessness to Jesus’ honor and glory. Let us learn to

Live with the Servant Spirit of the King!

We all realize that there is no life better than Jesus’ filled with kindness and compassion. Compare Jesus’ attitude to the typical mindset today. While sitting at the airport last Monday I overheard a mom talking to her daughter about her grandson. They talked about watching him grow physically, mentally and emotionally.  She was analyzing how his tendencies were pointing to a certain skill set.  She talked about schools he attended to learn a skill and tricks of the trade and then trying to find a place to put it all to use. I heard all about his resume, striving to make good first impressions and walk through any open doors that come along. You all get it. Our American mindset is one of slow and steady accumulation of acquiring, gradual possessing and progressing. You get it.

Along the way we balance our skills, interests, and aspirations with the skills, interests and aspirations of others. Then we get out the balancing scales to see when, where and how I can set aside what I’m doing to help someone else? How many sacrificing can I afford to make? You could give me examples of how this had led to regrets—you know: the should’ve could’ve moments of life when you had the ability to choose serving someone else, and didn’t. “I shouldn’t have said that about that person, but it sure made everybody laugh!” or “I should’ve have told them not to submit the report with the mistakes in it, but I didn’t and it sure made me look good!” Or “That’s too bad they didn’t get the memo and I got the promotion before they did.” This is our natural selfish tendency at work—and it’s just regrettable, it’s a divisive, damaging, displeasing and damnable sin. 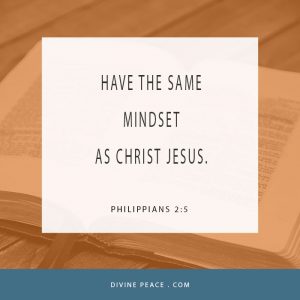 “In your relationships with one another, have the same mindset as Christ Jesus: Who, being in very nature God, did not consider equality with God something to be used to his own advantage; rather, he made himself nothing by taking the very nature of a servant, being made in human likeness. And being found in appearance as a man, he humbled himself by becoming obedient to death—even death on a cross!”

When Paul says Jesus was God, he’s not just trying to say that Jesus was God, but that this God-Man Jesus had all the qualities and characteristics of God fully at his disposal.  So, when Jesus was conceived in the virgin’s womb, it’s not like he left his majesty or power behind in heaven’s attic to be used as a later time. It is like the dad who is wrestling with his 4 year old kid on the floor.  Dad has all power to crush his son but doesn’t make full use of his power. So also Jesus always had the power and majesty of Creator God at his disposal. But, why is this so important?

This lowly donkey riding Palm Sunday King is the One who has no needs for himself. Jesus lacked nothing…except a donkey.  He could have created one immediately—poof! Like he created food to feed thousands from a few fish and pieces of bread, but he chose to have his disciples go a fetch a donkey for his use. Jesus could do whatever he wanted to do. So, in the typical mindset of the world, Jesus could have put on quite the show, be the most popular person, had anything his heart desired, and lived like a King.  Do you see, we can’t understand the selflessness of our Lord if we don’t first get that fact that this King had it all already.

“Who, being in very nature God, did not consider equality with God something to be used to his own advantage; rather, he made himself nothing by taking the very nature of a servant.”

Jesus could’ve done anything he wished in order to please himself, but Jesus never once used his power for himself, but always for us. Jesus willingly made himself nothing and selflessly chose the form and spirit of a servant for you.

When was the last time you colored in a coloring book? Let’s take a moment to open up our Jesus coloring book entitled “The Life of Jesus.” Open up to the first page and you see a picture of Mary and Joseph and the Baby Jesus in a manger. It is such an endearing picture—you’ll probably use many soft colors to express the beauty of the moment. Think about what this mean for a second. The King of the Universe spent 9 months in his mother’s womb, electing to be totally dependent upon the umbilical cord attached to his belly. Turn the next pages and see his many miracles. Remember, he didn’t perform these miracles for himself, but for their benefit. They ate, got healed, weathered rough seas and watched families members raised from the dead! Jesus graciously performed these miracles to teach the people about fear and faith. Now turn the page of your coloring book to Palm Sunday. You see people waving palms, putting the coats along the path, and shouting hosannas. Do you realize that of everything they gave Jesus, he was in need of none of it? Not one word of praise, one branch or one cloak would help Jesus achieve his mission for them. Rather Jesus called for his donkey and this event in order to fulfill the Scriptures and his heavenly Father’s promises for them. Jesus wanted them all to see his humble entry into Jerusalem as his path of selfless suffering for them.

Have you ever stopped to consider how this whole day might have affected the disciples?

“And being found in appearance as a man, he humbled himself…”

We know it was the disciples’ advice to Jesus to stay away from Jerusalem. After spending three years with Jesus and seeing his skills and abilities at work don’t you think they felt duty-bound to urge Jesus to stay away from Jerusalem’s threats? If they thought like so many do today we would have heard things like this, “Think of quality of life! Jesus!” or “You deserve better than this, Jesus!” Maybe they even felt the need to protect the one who wouldn’t protect himself like secret service agents who had conceal and carry permits for their little daggers.

However, we know there is even greater selflessness, yes, the greatest act of selflessness from Jesus. If I must be born a Jew I would pick a time that wasn’t under Roman rule. If I could choose my death, it would be a death with dignity.  Not as Paul says,

“he humbled himself by becoming obedient to death—even death on a cross!”

There was no death viewed as more cursed than the cross. It was designed for ridicule, for scorn, for being cursed, for being despised. Yet, in the depths of this depravity we see through the eyes of faith the supremacy of his selfless service of love to us.  It wasn’t the mind of Mary, of Disciples, of mockers or courts.  It was Jesus’ mind. It was not his protection that matters, but it was ours.

“Therefore God exalted him to the highest place and gave him the name that is above every name, that at the name of Jesus every knee should bow, in heaven and on earth and under the earth, and every tongue acknowledge that Jesus Christ is Lord, to the glory of God the Father.”

If you find it hard to fathom how selfless Jesus was on earth, it’s just as impossible to fathom how exalted he is. When Jesus fulfilled his mission of suffering servant for us, he was exalted to the highest place. Remember his not making full use of his power and glory earlier?  Now, he is. There is no greater name; there is no greater Savior. His arms stretch infinitely wide to embrace all sinners who call on his name with his love and forgiveness. He reaches out through his Word and Sacraments.  He mediates before the throne of God on our behalf.  He also serves us through his people who serve each other.

Remember the ones who need your closeness, your love, your patience and your sympathy? Those people are here.  They are sitting next to you, behind you, and in front of you.  They are with you at work, at the Walmart, at Home Depot, at restaurants, at every place were people are in your space, in your community. Today, on the first day of Holy Week called Palm Sunday, let’s live with the servant spirit of the king who rode into Jerusalem to save us.  Then let us come in worship and praise before our Lord and fall in love with God, serve each other with love, and serve our neighbor with love.  Amen!