Ready To Face The Real World!

44 He said to them, “This is what I told you while I was still with you: Everything must be fulfilled that is written about me in the Law of Moses, the Prophets and the Psalms.”

45 Then he opened their minds so they could understand the Scriptures.46 He told them, “This is what is written: The Messiah will suffer and rise from the dead on the third day, 47 and repentance for the forgiveness of sins will be preached in his name to all nations, beginning at Jerusalem.48 You are witnesses of these things. 49 I am going to send you what my Father has promised; but stay in the city until you have been clothed with power from on high.”

50 When he had led them out to the vicinity of Bethany, he lifted up his hands and blessed them. 51 While he was blessing them, he left them and was taken up into heaven. 52 Then they worshiped him and returned to Jerusalem with great joy. 53 And they stayed continually at the temple, praising God.

“Now I’m ready for the real world!”  I can’t remember thinking that at my graduation from either college or the seminary.  How about you?  For sure I gained some valuable experiences during my college years. I studied, but probably not always with the best study habits. Sometimes I was lazy, or even lied to myself, “I got this!” but really didn’t. Or all too often waiting too long and then having to grind it out at an “all-nighter!” I do remember graduating from the seminary and feeling really scared—not just because my first assignment was to Japan, but because after a year of internship (vicar year) I felt really inadequate, and hardly ready for the “real world.” I knew a road was in front of me, but which direction? I learned the answers to so many questions of the past during my years of study, but after graduation I probably had more questions for the future. Then my favorite professor took his position behind the lectern on the stage.  I think I had learned more from him than the rest of my professors combined.  He was really good! And I do remember anticipating his words of wisdom like he had always shared….. he begins.

as he rattles off several points that he had been teaching over the past years. There were no novel ideas.  No new predictions of the future.  It was the same ol’ stuff. And at first I was disappointed until I realized what his point was. I was hearing the same ol’ stuff, but with ears more eager to listen. The things he had taught us were all coming to an end for him, but coming alive in us. Then he shocked the crowd by announcing his leave of absence and left the stage. He had disappeared from our sight, but not from our lives. He left us.  He left us with much!  He left us with much so we might be ready to live in a real world!

Today we are celebrating the Ascension of our Lord Jesus, traditionally celebrated 40 days after Easter, which would have been this past Thursday. Jesus left his disciples, but he left them and us with much. May the Holy Spirit guide our meditation on Luke 24 so that you

Just as graduation ceremonies celebrate what has taken place & what will happen in the future, so also the Ascension of Jesus Christ celebrates what has happened & what will take place in the future. I’m quite sure that on graduation day the students sitting there are not thinking about their retirement. So Jesus’ Ascension is not the celebration of the end of his work, but really the celebration of work that leads to even more work.  We call Jesus’ work his “Office of Prophet, Priest, & King.” Luke follows this same pattern in the Word of God before us today.

When I was growing up our next door neighbor, Mr. Gareno, was a test pilot for Rockwell Jets.  One afternoon his jet crashed and I’ll never forget attending his funeral on NW Highway. There were fighter jets that screamed over our heads and one of the jets pealed off, representing a lost pilot. This was a spectacular way of showing honor for Mr. Ganero. Wouldn’t you think that if Jesus had one last thing to say he would have a couple of angels fly overhead like screaming F-22 jets to elicit some oohs and aahs! But, no!  It’s just the same ol’ stuff. 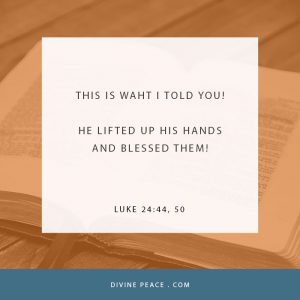 “He said to them, “This is what I told you while I was still with you: Everything must be fulfilled that is written about me in the Law of Moses, the Prophets and the Psalms.”

The disciples had heard it all before.  Maybe like good Lutherans who have read the same liturgy, the same readings, the same hymns for how many years?  Some would say, “La dee dah and Ho hum. Been there heard that.  Got the T-shirt.” And that’s when Jesus blew their minds…..

“45 Then he opened their minds so they could understand the Scriptures.”

Then you read the Gospel accounts of Jesus you can’t help but notice how many times they record these words,

These words were recorded by the disciples we’re talking about today! Jesus connected the Scriptures to the miracles, the teaching, Palm Sunday, Judas’ betrayal, Peter’s denial, suffering, death on the cross and resurrection from the dead. Jesus had already pictured, predicted, promised and now fulfilled every point.

When we were moving my parents from Belle Plaine, MN to Watertown, WI a couple months ago, my brother Tom was really worried that all the stuff wouldn’t fit into the U-Haul. I was confident it would. When we were done you could hardly fit another thing into the back as we shut the door. Jesus fulfilled the OT Scriptures like a well packed U-Haul. Every word spoken by the prophets was fulfilled by The Prophet! But, this was only half the story…..

The promises the Lord made through the pages of Scripture are sill coming true today as the Holy Spirit opens your mind to understand the Scriptures. Jesus could send fighter jets, fireworks or even the finger of God writing messages in the clouds, but they would all be here, be seen, and disappear.  You have what is by far better and more reliable. You have the Bible! Jesus continues to fulfill his Ascension Promises every time you read your Bible personally, attend worship regularly, enjoy Bible Class, provide Bible lessons with your family growing, and First Step Bible Information Classes for new members.  You will want to have these same promises from Jesus when you are standing next to the grave of someone you love, who now is with Jesus in heaven. Believe Jesus’ Ascension Promises as he continues to fulfill his Prophet Promises to you.

While we are so thankful that the Lord has given us his Word in order that we might know and believe in Jesus, sometimes the connection between God’s Promises and my Heart look like the Grand Canyon. When you’re trying to make the connection between your head and your heart, or between the truths of Scripture and your day to day life, you will want to remember that Jesus Ascension Promises are fulfilled by his Priest Promises.

Do you know why the Catholic church refers to their worship leaders as “Priests” and you refer to your worship leader as a “Pastor”?  The Catholic Church uses this terminology because they connect their local priest and his parish to the local Bishop, who in turn is connected to the cardinal, who in turn is connected to the Pope.  The pope considers his office to be the “Vicar of Christ on Earth” or in other words, “God’s Representative.” So, if you want to be connected to God, you go through the Priest, the mediator between you and God. But, you call your worship leader a pastor because you know Jesus and his Priest Promises!

Listen to Jesus’ words to his disciples,

“46 He told them, “This is what is written: The Messiah will suffer and rise from the dead on the third day, 47 and repentance for the forgiveness of sins will be preached in his name to all nations, beginning at Jerusalem.”

All OT believers were looking forward to the arrival of the Messiah, the “Anointed One” who would be their go-between—Mediator. In the OT the priests were the ones who would represent the people to God and God to the people. The Children of Israel has Moses, Moses had Aaron, they all needed the Mediator. The Priest would also offer sacrifices for sins and announce God’s forgiveness to the people. When Jesus came, he came as the fulfillment of all those priests, sacrifices and announcement of forgiveness.

“48 You are witnesses of these things.”

You see, you no longer need a priest to be your representative, you want a pastor to direct your attention to Jesus.  You have Jesus with his Priest Promises.  That means Jesus is in heaven right now pleading and mediating on your behalf, and you now get to be the ones who are witnesses to others about his Wonderful Works of God. You will want to know how much Jesus’ loves you and mediates on your behalf when you sin against your spouse, cheat at work, lie and doubt.  Your Ascended Lord Jesus continues to fulfill his Prophet & Priest Promises for you.

It didn’t’ say it was necessarily easy to be witnesses for Jesus. The world we live in is broken, relatives are angry with each other, glamorized movies challenge Biblical truth, assaults on your morals by rewarding immoral behavior and weakens your resolve by constantly attacking your Christian beliefs. You need some help.  We have it in Jesus and his

After telling his disciples to be his witnesses Jesus give them another command,

“49 I am going to send you what my Father has promised; but stay in the city until you have been clothed with power from on high.”

Jesus was not going to call his disciples into service without equipping them for the work. Indeed, God provides what his people need for the work to get done. When the president raises his hand to take his oath of office to protect his people, he knows he’s got the power to back up his promise.  When Jesus ascended into heaven he raised both hands and blessed his Church with the necessary tools (gospel in Word and sacrament) to get this kingdom work accomplished.

Then it happened.  Jesus rose into the clouds and back into heaven as recorded by Luke,

“50 When he had led them out to the vicinity of Bethany, he lifted up his hands and blessed them. 51 While he was blessing them, he left them and was taken up into heaven. 52 Then they worshiped him and returned to Jerusalem with great joy. 53 And they stayed continually at the temple, praising God.”

The very same disciples that were once cowering in the upper room after Jesus’ resurrection are now boldly worshiping him in the temple courts.  How is this possible? Jesus the King blessed them with the promise to rule for the eternal benefit of his people! Jesus has conquered the enemies of sin, death and the devil for you.  This is his blessing of grace, power and glory!