The truth hurts, but death is forever.

Our conversation was going really well, until he brought up one of his daughters. She wasn’t a blood relative of his, but he and his wife had taken her into their home and raised her for a number of years. She came to them broken and frustrated with school, but as time went on, all of that began to change. She began to smile more, do well in school and she even began to go church. They were so happy with her until she met a boy. It’s not like meeting a boy is a bad thing, but he wasn’t good for her. She stopped working hard, started making bad decisions and stopped going to church. When her father finished telling me about her, he ended with these words, “I’d like to say something to her, but what can I do?”

When Ezekiel began his public ministry to the southern kingdom of Judah, the fall of the northern kingdom of Israel and exile of its people had already happened over a hundred years before. Ezekiel’s calling to go and call the cousins of Israel, Judah to repent didn’t look promising. However, Ezekiel was faithful to his calling and told the people to repent, but they didn’t listen. For their lack of repentance, God also punished Judah through the Babylonians and Ezekiel along with thousands of others were deported to Babylon.

While in Babylon, God continued to give Ezekiel words to speak to the people of Israel. God said to him,

7 “Son of man, I have made you a watchman for the people of Israel; so hear the word I speak and give them warning from me.

To Ezekiel and the people of Israel, it seemed like all was lost; hundreds of years earlier, the kingdom of Israel splint into the North and South, then the northern kingdom fell to Assyria, now Judah had fallen and the most of the people of Israel had be taken into exile. When God called to Ezekiel, it seemed pointless because the kingdom had fallen, but God always had a greater kingdom in mind.

God told Ezekiel he was to be a watchman for the spiritual kingdom of Israel. A watchman in ancient times stood on the walls of a city and watched for enemies coming to attack. If a watchman saw an enemy approaching, then he would blow his trumpet alerting the citizens of the attack and alerting the army to get ready to defend the city. If a watchman did not warn the people, any loss of life or property was his fault because he did not warn the people. At the same time, if the watchman did alert the people, but they choose not to listen, any loss of life or property was their fault.

Again, God called Ezekiel to be a watchman for Israel saying to him,

Ezekiel’s job was to keep a remnant of Israel faithful to God while they were in exile in Babylon. God had allowed for his own people Israel to be punished through the Assyrians and Babylonians to show the seriousness of turning away from faith in him. God went so far as to let the physical kingdom of Israel fall, to show that he would continue to be their God even without an earthly kingdom. This is how stubborn Israel was, that they were given hundreds of years to repent and turn to God through the many prophets God sent, but in the end, many were lost.

When the prophets confronted Israel, with their sin and lack of faith in God, the Israelites followed the pattern of the world. People who are confronted with their sins fight back. No one wants to hear that they have done something wrong or that they have to give up doing something that makes them happy. They also don’t want to admit their sins or give up doing things that make them happy just because God says so.

At this point you might expect the sermon to point out the many sins we commit and how God call us to repentance. All of that is true, but that is not the point of this portion Scripture from Ezekiel. This section of Scripture makes the point that if you know a fellow believer caught in sin, but say nothing and they lose their faith, then it is your fault for not calling them to repentance. On the other hand, if you know a fellow believer is caught in sin and go to them to show them their sins asking them to repent and turn back to God, then you have fulfilled your duty to your fellow believer. Now that fellow believer might not listen right away or ever listen to you, but as long as you make the loving effort to call them back to faith, you have been a faithful brother or sister in the faith to that person.

So then, the sin we are all guilty of today is not always calling one another to repentance. This can happen because we are too afraid to say something or not sure what to say. It can happen because we choose to live in ignorance and not get to know the struggles of our fellow believers. It can also happen because we would rather preserve an earthly relationship with someone by not sharing the Word of God with them as it might upset them and lead them not to talk to us. This is not an exhaustive list, but it illustrates how many ways we are guilty of failing to be watchmen for our fellow believers.

God makes a big deal of calling our fellow believers to repentance because the alternative, unrepentance, is death. That’s too extreme though, for God to demand we hold one another accountable to our sins and to say that lack of repentance leads to death. Even the sermon theme “The truth hurts, but death is forever” is too extreme. Often, this excuse is given because it makes us feel less guilty for not holding one another accountable, but it is wrong.

It is wrong to think that allowing a person to continue on in their sins is something God wants and it is wrong to think that continuing in unrepentant sin does not end in death, not just physical, but spiritual death or unbelief. To be clear we are talking about situations where believers call their fellow believers to repentance when they continue in unrepentant sin. This is not permission to gossip about someone’s struggles by calling it “informing others,” nor is it permission to find out every sin someone has committed and make sure they repent of those sins publicly before the church.

This is our calling as fellow believers to call one another to repentance. God calls us to do this because it is dangerous for a believer to continue to do something sinful and not repent. It is dangerous because that person is now calling sin something good, which contradicts God, puts themselves in place of God and takes away the power of the law to show us our sins, which empties the gospel of its power to call sins forgiven.

Jesus has forgiven us for all those times we have failed to be watchmen for one another. Throughout his time in this world, Jesus called sinners to repentance. Last week we had the example of Jesus confronting Peter with his lack of faith in Jesus’ mission as the sacrificial Savior. Jesus even went so far as to call Peter, “Satan!” Jesus’ ultimate goal in calling out Peter was not to humiliate him, but to show him the error of his thinking and bring him back to faith in Jesus as the Savior who had come to die for our sins. Jesus gave Peter the personal assurance of his forgiveness when he appeared to him after his suffering death and resurrection. Peter had no reason to doubt the love of his Savior Jesus and Jesus’ power to forgiven him for his sins. 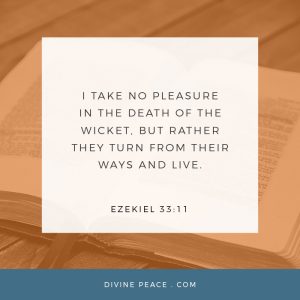 The exiled people of Israel knew how serious God takes sin. They needed a watchman to point them back to God to also be reassured of his love and forgiveness. As God continued to remind Ezekiel of his calling as Israel’s watchman he said,

10 “Son of man, say to the Israelites, ‘This is what you are saying: “Our offenses and sins weigh us down, and we are wasting away because of them. How then can we live?”’ 11 Say to them, ‘As surely as I live, declares the Sovereign Lord, I take no pleasure in the death of the wicked, but rather that they turn from their ways and live. Turn! Turn from your evil ways! Why will you die, people of Israel?’

The results of their sins were right before the people of Israel. They cried out wondering how they could be rescued from their sins and the punishment they had brought on themselves. God’s response through Ezekiel was that he does not want to punish sinners, but that they turn away from sin to follow him.

Those who turned to faith in God enjoyed the burden of their sins being lifted away. Those in Israel who died in faith are now in heaven. Others, saw both God’s deliverance of Israel from Babylon back to Jerusalem to rebuild their earthly kingdom and when they died, were brought to the kingdom of heaven. We are among those who have seen in the Scriptures God’s deliverance of Israel, his faithfulness to his promises and the ultimate deliverance through our Savior Jesus.

The death our sins deserve was died on the cross by Jesus. When the law finally sinks in to those who are stuck in sin, they realize how lost they are and how desperately they need Jesus. Without Jesus, we die in our sins separated from God. With faith in Jesus, we die confident in Jesus’ resurrection and in his power to bring us back to life with him in heaven forever.

Conversations with our fellow believers about sin is hard. Maybe the most difficult conversations are the ones we have to have with our own family members. Whether we are blood relatives or relatives through Jesus blood we are called to share the law and gospel with one another. We do this even when the truth hurts because we have the answer to eternal death. We share the truth of the gospel because it brings healing and eternal life. So, take your pens and open up to page 12, find the sermon theme and cross out the word ‘hurts’ and write in ‘heals,’ cross out ‘but’ and write ‘and,’ and cross out ‘death’ and write ‘life.’

As you leave here today, go out expecting to have situations where the law must be used to show the dangers of sin and do not be afraid. You are watchmen for Jesus. You have seen the enemy of sin and death defeated and our victorious Savior risen and waiting to bring us home to heaven. Amen.