Use Your Time of Grace Wisely!

6 Then he told this parable: “A man had a fig tree growing in his vineyard, and he went to look for fruit on it but did not find any. 7 So he said to the man who took care of the vineyard, ‘For three years now I’ve been coming to look for fruit on this fig tree and haven’t found any. Cut it down! Why should it use up the soil?’

8 “‘Sir,’ the man replied, ‘leave it alone for one more year, and I’ll dig around it and fertilize it. 9 If it bears fruit next year, fine! If not, then cut it down.’”

Everyone wants to make good use of their time.  And what it means to make good use of your time depends on who you are.  Mike might say making good use of his time is playing video games…. With his son.  Mary might say making good use of her time is watching a movie…. With her husband.  But, if playing video games takes us most of your time then someone might suggest that you’re wasting time.  If you’re watching a movie that ends up being no good someone might suggest that you could have done something better with those two hours.  That’s why people who put on the Super Bowl hope the game isn’t a blow out, but a close game so that people will watch the game, and the commercial, more intensely.

Spend Your Time Of Grace Wisely!

Some use their time to watch the news.  When they are reporting on a very graphic crash they might say, “Warning!  This scene is very graphic!”  That was the case in the gospel lesson for today.

“Now there were some present at that time who told Jesus about the Galileans whose blood Pilate had mixed with their sacrifices.”

Graphic!  While some priests were preparing the animal sacrifices by draining their blood, evidently Pilate had to send soldiers into the temple area with the sword regarding some Galileans.  We aren’t sure, but perhaps there was a riot or uprising.  No matter, the blood of those killed was mixed with the animal sacrifice blood—it was shocking scene!  Listen to Jesus’ reply:

“2 Jesus answered, “Do you think that these Galileans were worse sinners than all the other Galileans because they suffered this way? 3 I tell you, no!”

Let’s suppose the Galileans were faithfully coming to offer their sacrifices to worship the Lord.  Can you hear the people’s questions?  “I wonder why God let’s bad things happen to good people?”  or  “What kind of a loving God allows such a terrible thing to happen to faithful people?”   Jesus knows.

To make his point Jesus refers to another event that took place near Jerusalem:

“4 Or those eighteen who died when the tower in Siloam fell on them—do you think they were more guilty than all the others living in Jerusalem?”

Jesus’ answer addresses a common misconception of the Jewish people.  They thought that when bad things happened the people must have been really bad people and deserving of such a punishment.   You saw the same thing when Job’s friends came to help Job come clean when he lost his wealth, health, and children.  His friends were convinced it was because Job at worst—had done something horrible wrong to get on God’s bad side; and at best—hadn’t been faithful.

Jesus teaches about bad things that happen.  God doesn’t always let us see why he either allows, permits or brings tragedy, sickness, and heartache into the lives of his dear people.   And he doesn’t have to.  But, the Savior God does draw our attention to where it needs to go.  It is not due to how good or bad a person is!  It is due to the affects of sin in our lives.  (Objective curse of sin in the world, and subjective dumb sins one commits and has to deal with the consequences).   Jesus said,

“3 I tell you, no! But unless you repent, you too will all perish.”

This includes everyone!  Therefore, God has to give us the solution!  All sinners need to be turned away from sin, death and the devil to the holiness that is in Christ Jesus.  Jesus is the one who met the wrath of God deserved pictured at the animals sacrifices in Jerusalem (life must be paid for sin), or at the cross where Jesus paid for the sins of all people.  This is Jesus’ point that needs to be driven into the hearts and minds of all people:  Use Your Time of Grace Wisely and Faithfully Follow your Savior Jesus!

We are tempted to forget what God’s Word says about our Time of Grace.  We are tempted into the same thinking of the people in Jerusalem.  Tragedy strikes someone who you’ve always thought lived a pretty shady life and you think, “Well, they had it coming!”  You heard about the shootings in places of worship and thought, “They don’t worship the true God, so…”   I remember when Hurricane Katrina hit New Orleans instead of Houston and some people kidingly said, “They needed a good flushing!”  Maybe you thought those sinful people deserved those things.  All the while you’re sitting back and ignoring the use of Your time of Grace in your own life.   You’re wasting your time if you’re not organized and don’t have things planned.  We don’t have to plan the things we like to do, but we have to plan the things we don’t like to do.  Yes, there’s a struggle because sin has infected the perfect use of time as God intended.  Those who have lots of time, wish they had something to do.  And those who have lots to do wish they had some more time.   So, we struggle to faithfully, but not hectically, manage our time.  Point of thought: Jesus never hurried anywhere, but he accomplished what he came to do because did all things perfectly faithful.   I know how it goes…..  Your “idle time” moves slow.  However, your “busy time” moves fast.  I guess Einstein was right—time is relative!  LOL!

For the times we have not managed our Time of Grace well, we repent, as Jesus encourages us, and trust in his forgive so that we don’t perish!  Use your Time of Grace to not only forsake sin, but also to be turned to Jesus.

It’s like a married couple in the car and the wife tells him to make a right turn at the next intersection.  By mistake, the husband makes a left hand turn instead.  Oops!  When he realizes what he did, he turns to his wife and says, “Sorry dear, I went the wrong way!”  She then says, “I forgive you.”  But, if that’s is all he says and does, it’s not enough.  His being sorry is not getting them closer to where they want to be. To get where they need to be, he needs to admit his was wrong and go the way he was supposed to go in the first place.  That’s Christian repentance.  Admitting wrong doing, receiving forgiveness, and willingly correct what was done wrong.  This is one example of using our Time of Grace faithfully and wisely.   This, in turn, will lead us to Use Our Time of Grace

We all have the same amount of time, but how we manage that time in order to accomplish our goals, or to be “fruitful” with our time is important.  Please don’t put this off.  Don’t say, “I’ll repent and turn from my misuse of time tomorrow,” because we all know what happens to that statement.  Tomorrow never comes.  Today is the day to Make Wise Use of your Time of Grace so that you can be fruitful as a dear child of God!  Take Jesus’ warning to heart:

“I tell you, no! But unless you repent, you too will all perish.”

Jesus knows that our Time of Grace on this earth might be cut short and he certainly doesn’t want it to end with you facing God’s wrath and judgment as you remain unfaithful and unfruitful!   Jesus made his point with this parable: 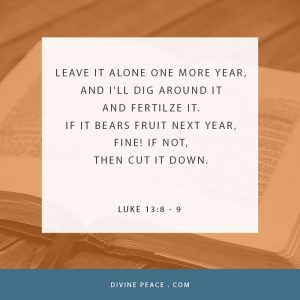 “6 Then he told this parable: “A man had a fig tree growing in his vineyard, and he went to look for fruit on it but did not find any. 7 So he said to the man who took care of the vineyard, ‘For three years now I’ve been coming to look for fruit on this fig tree and haven’t found any. Cut it down! Why should it use up the soil?’   8 “‘Sir,’ the man replied, ‘leave it alone for one more year, and I’ll dig around it and fertilize it. 9 If it bears fruit next year, fine! If not, then cut it down.’”

In context Jesus was talking to “fruitless” Israel.  But, we could substitute ourselves in the parable.  God expects to see fruits in your life.  He looks for good works, that is, those things we do according to his holy will as revealed in the 10 Commandments and the rest of the pages of Scripture in your life.  These God-please fruits of faith reveal to you and those around you a real healthy faith in Jesus.  No fruit bears evidence of a spiritually dead person that will end up being cut down and thrown in eternal flames of hell.  The urgent call from this parable is also clear:  Be Fruitful in How You Spend Your Time of Grace!

To be sure, we have all had our days of fruitless branches.  Thankfully, God is patient in looking for fruit in your life.   His patience is a miracle of his grace for Jesus’ sake.  Because of Jesus who paid the price for a perfectly fruitful life, paid that price with his life on the cross for you.  That is exactly why we call this precious time on this earth, our Time of Grace.  It is undeserved.  We don’t use it faithfully.  We don’t use it fruitfully according to God’s standard.  But, Jesus did.   Peter was inspired to write,

“The Lord is not slow in keeping his promise, as some understand slowness. Instead he is patient with you, not wanting anyone to perish, but everyone to come to repentance.”

But, our second lesson for today from Corinthians reminds us that God’s patience does come to an end.   So, don’t take God’s patience and our precious Time of Grace for granted.  No, let’s repent and be fruitful!  In the management of time let us rest secure in the promises of God.  In Jesus who managed time perfectly for you to give you full forgiveness of all your sins.  Yes, Lord, dig around my roots, one more day to bear fruit for you, to share Jesus with others so they can have what we have.  That means we will have to bear some crosses in life, but not without the strength that Jesus has already provided by bearing our eternal punish for sin on his cross.  I know some of you will use your time to play video games, and others to watch movies, but let’s all be sure to use our Time of Grace faithfully and fruitfully in thankful service and love to our gracious God for the sake of other who don’t yet have what we so enjoy.  Yes, management your time of grace now as you prepare to enjoy God’s time for eternity in heaven.  But, that’s a whole ‘nother sermon, and I don’t have time for that.  Amen!

The Tomb was Empty!