24 “But after that distress in those days, the sun will be darkened, and the moon will not give its light. 25 The stars will be falling from the sky, and the powers of the heavens will be shaken. 26 Then you will see the Son of Man coming on clouds with great power and glory.   27 At that time he will send out his angels and gather his elect from the four winds, from the farthest end of the earth to the farthest end of the sky.

So there he was lying on the ground—dead. They had seen death before when they killed animals for the sacrifice, or for food.  But, the man lying on the ground wasn’t an animal, he was a man and he was dead. It was his brother—a human just like he was. What do you think was running through Cain’s mind as he gazed down at the first person to die in the history of the world? Maybe he ran away right after he killed him.  Maybe he stood there a moment and watched the blood ooze and asked himself, “What now? I wonder what will happen to my brother now?” And then when Adam and Eve found out.  Did they come and look down at their son lying in a pool of blood with horror and heartache, for no blood means no life! We know that Eve considered her next son Seth to be gift from God to replace Abel.  But when she and Adam buried their son did she wonder; “What now?”

Abel was the first human being to die after the creation of the world, and ever since he died all humans who ever lived have died. Over and over people have wondered what happens at the end of life. On this Saints Triumphant Day, the Lord supplies us with lots of answers to this important question; What will happen to me after I die?” The Lord makes promise after promise about what our future holds. God isn’t interested about debating with doubters or answering cynics. When God talks about the end of life he talks to his dear children who trust in him. He tells us exactly what we need to know so that we will look forward to our future and be ready for it when the day of our death comes and people ask,

This is exactly what Jesus was doing in Mark 13. He was answering this important question of “What then?” on Tuesday of Holy Week while talking to his disciples. That day Jesus had confronted his enemies by talking about the wicked tenants of the vineyard who killed the owners servants and son. In return the owner of the vineyard killed the tenants and gave the vineyard to others who would care for it.  The enemies got the point and hated Jesus for it. They tried to catch Jesus by tricking him about paying taxes or not, and Jesus gave that famous answer,

“Give to Caesar what is Caesar’s, and to God what is God’s”

The confrontation between Jesus and the religious leaders intensified and it signaled the end of their special relationship with God. Yes, God had sent them the Messiah as promised, but they rejected him with all their heart. As the day was coming to a close Jesus was at the entrance of the temple where he observed a woman putting her offering into the collection area. Jesus said,

“I tell you: This poor widow put more into the offering box than all the others. 44 For they all gave out of their surplus, but she, out of her poverty, put in everything—all that she had to live on”

She was all in, and so was Jesus. What then?

It was now late in the evening as Jesus and his followers were walking out of Jerusalem.  That’s when the conversation got really interesting between Jesus and his disciples.

Mic Drop!  They didn’t ask Jesus anything until they had walked on,

“3 As he was sitting on the Mount of Olives opposite the temple, Peter, James, John, and Andrew asked him privately, 4 “Tell us, when will these things happen, and what will be the sign when all these things are about to be fulfilled?”

What then? As Jesus answers we recognize that he is giving more than just a play by play of the coming disaster about to hit Jerusalem. He’s describing what life is like for all of his followers as they wait for him to return, as they look into an unknown future and ask, “What now?”

“But after that distress in those days, the sun will be darkened, and the moon will not give its light. 25 The stars will be falling from the sky, and the powers of the heavens will be shaken.”

We are very familiar with these words of Jesus because they come to mind when we hear about another war, rumor of war, earthquake, tidal wave, famine, disease, nation against nation, and kingdom against kingdom. Every generation has asked the same question, “Is this the end?”  Wild fires killing 76 in California and 1,300 missing!  God is leaving his carbon foot print! Right!  Is this the end? I’d like to answer them, “No, it’s not the end of sinners.  As long as people are sinful and selfish, there will always be deceivers, destruction and natural disasters. Then you will also know the struggles of relationships–you know them at work, at school, in your neighborhoods. People who invade houses, rob, steal, cheat. And sometimes it gets closer to home as people search for meaning for life in all the wrong places.  Yes, the end is coming, but don’t sell your house or spend down your savings just yet.

Don’t be naïve, either! Jesus was honest with his followers,

“9 But be on your guard! … 12 “Brother will betray brother to death, and a father, his child. Children will rise up against their parents and put them to death. 13 You will be hated by everyone because of my name, but the one who endures to the end will be saved.”

As it was in the day so of Jerusalem, so it is today. There are also enemies in society! People are still betraying each other, families are falling apart and people are being tempted away from the truth of God’s Word by the empty promises of society. Think about it!  What do the enemies of God’s people say about us when we oppose abortion, gay marriage, and insist on saying “Merry Christmas” instead of “Happy Holidays!” As it was in the days of Jesus, so it still is in our day, right here in Garland, Texas. So, “What Then?”

“You will be hated by everyone because of my name, but the one who endures to the end will be saved.”

We are not walking on this troubled road alone. Jesus came deliver us from this sin infected world with death and destruction. Jesus is also with us as we wait and watch. There are no surprises here. As much as there is the reality of trouble, there is the promise of triumph. So, as we wait, what then?

What then?  Jesus tells us:

“But after that distress in those days, the sun will be darkened, and the moon will not give its light. 25 The stars will be falling from the sky, and the powers of the heavens will be shaken.”

If we are still alive on the day that Jesus returns, what we see won’t be like anything anyone has ever seen before. St Paul said,

The same Lord God who created all things at the breath of his mouth, will give the command and all creation will be shaken.  That’s what! 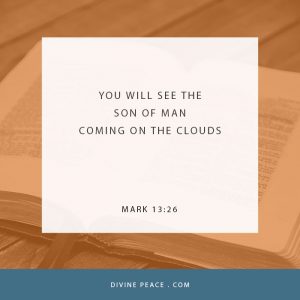 “26 Then you will see the Son of Man coming on clouds with great power and glory.”

Jesus is returning with his army of angels, and with the souls of all those who have already died and gone into heaven, such as the soul of Abel. Then the same Lord who said, “Let there be light” and there was light—this same Lord will raise up their dead bodies (buried or cremated) to be reunited body and soul to live forever with Jesus.  That’s what!

And how do we know?  How can we be so confident? Because the same Jesus who came the first time, did so perfectly. Jesus was never selfish, never deceived, was honest with friend and foe, never robbed, cheated or stole from anyone. Jesus never said to his Father, “I just don’t feel like you love me” because Jesus knew his Father’s love from his Word of promise. This same Jesus is so good and loves you so much he came and died to pay the penalty of all your sin.  His resurrection proves that his work was perfectly completed so that we need not worry when we die. What then?

Good Question.  When unbelievers die and place a body in the grave they ask, “What now?” with anger and hopelessness just like Cain when he killed his brother Abel. God’s people also put loved ones in the grave and ask the same question, “What then?” with faith and hope! And God answers our question about his Saints Triumphant with the promises of his Holy Word.  What then? You ask? Listen to God’s answer:

“15 They are in front of the throne of God, and they serve him day and night in his temple. He who sits on the throne will spread his tent over them. 16 They will never be hungry or thirsty ever again. The sun will never beat upon them, nor will any scorching heat, 17 for the Lamb at the center of the throne will be their shepherd. He will lead them to springs of living water. And God will wipe away every tear from their eyes”