Your Good Shepherd Jesus Holds on to You!

22 Then came the Festival of Dedication at Jerusalem. It was winter, 23 and Jesus was in the temple courts walking in Solomon’s Colonnade. 24 The Jews who were there gathered around him, saying, “How long will you keep us in suspense? If you are the Messiah, tell us plainly.”

25 Jesus answered, “I did tell you, but you do not believe. The works I do in my Father’s name testify about me, 26 but you do not believe because you are not my sheep. 27 My sheep listen to my voice; I know them, and they follow me. 28 I give them eternal life, and they shall never perish; no one will snatch them out of my hand. 29 My Father, who has given them to me, is greater than all; no one can snatch them out of my Father’s hand. 30 I and the Father are one.”

Today is Mother’s Day. Today we are all encouraged to thank our mothers for raising us but following through on what we are asked to do on Mother’s Day is not always easy. A few days ago, I was talking with Erica at a local packaging store here in Rockwall. As we talked, we found out that we had lived in the same area of Northern California growing up. She then went on to talk about how her mother dragged her to church as a child. Between the early mornings, long drive and the service she did not understand, she dreaded going to church. Her mother had to drag her to go and as she fought to stay away from church, she even told her mother that she did not believe in God. Erica’s mother knew that if she did not hold on to her daughter and keep her coming to church, she would be lost to the world. Today is Mother’s Day and also Good Shepherd Sunday. Today not all of us had to be dragged here, but we all still have that sinful nature in us that would rather be anywhere else right now and the memories of times when we too have fought against our Good Shepherd. For all the times when we felt separated from Jesus, today we have the good news from our Gospel reading from John 10 that your Good Shepherd Jesus holds on to you. 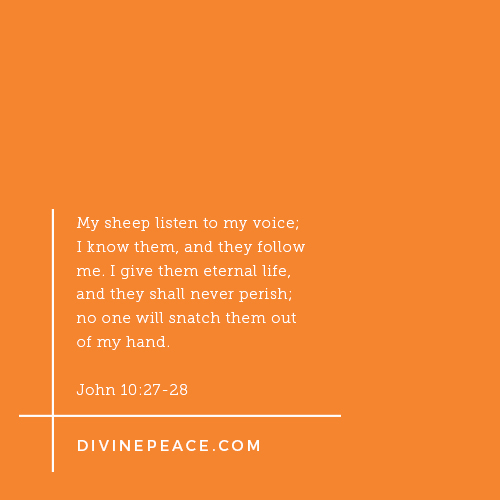 As we pick up in the middle of John 10, John lets us know that some time has passed between verses 21 and 22. In the first half of John 10, Jesus used an illustration of sheep knowing their shepherd’s voice and only following him to show how those with faith recognized Jesus as the Savior. Jesus also pointed out that there have also been false shepherds among the sheep of Israel who have worked to steal God’s people away from him. Our Gospel reading from John 10 beginning at verse 22 picks up a few months after Jesus had given this sermon to the crowds. Now a few months later, John tells us it is winter and the time for the Festival of Dedication in Jerusalem. This festival is better known to us as Hanukkah and celebrates the rededication of the temple in Jerusalem in the time between the Old and New Testament. John tells us that Jesus was in Jerusalem during the festival and was walking in Solomon’s Colonnade, which was on the temple grounds. Many Jews were in Jerusalem for the festival and when they saw Jesus, they went to ask him if he was the Savior.

When the Jews asked Jesus if he was the Savior, the response they got from Jesus was not what they wanted to hear. 25 Jesus answered, “I did tell you, but you do not believe. The works I do in my Father’s name testify about me, 26 but you do not believe because you are not my sheep. Jesus’ response revealed that the Jews who asked him if he was the Savior were not asking so that they could hear Jesus say, “Yes,” and then praise him. Instead, they were asking out of unbelief without any desire to follow Jesus as their Good Shepherd. Jesus had already revealed who he was through his words and actions. Many times, Jesus used parables, illustrations or Scripture to point to himself as the Savior, always being careful how he revealed his identity so that they would not be able to accuse him of blasphemy for which the punishment was death. Jesus may not have said who he was how the Jews wanted him too, but he had said enough and done enough miracles to make him the target of unbelievers and Savior in the eyes of believers.

The unbelieving hearts of so many of God’s own people Israel became clear when Jesus was crucified. In our first reading from Acts 13, Paul gave a brief history of Israel ending with Jesus and said, 28 “Though they found no proper ground for a death sentence, they asked Pilate to have him executed.” The people wanted Jesus executed because he claimed to be the Savior and the Son of God. He claimed to be what God promised to send to save mankind, but they rejected him. He also proved who he was through miracles by showing his power to help us by taking away hunger, sickness and even death. No good reason was found to put Jesus to death, but they did. No good reason was there for the Jews to ask Jesus who he was because he had already shown them who he was. No good reason exists for us to doubt who Jesus is, but we do.

Like the Jews who came to ask Jesus if he really was the Savior, we also question who he is in our own way. Even though Jesus has told us and shown us through his Word, his miracles, baptism, the Lord’s Supper and the empty tomb that he is our Savior, all he offers us still doesn’t seem like enough. And for those who trust Jesus is the Good Shepherd, asking whether or not he is who he says he is, is more about how and when we get what he has to offer as our Good Shepherd than doubting whether or not he is the Savior. In other words, when Jesus tells us that we have eternal like through him, we wonder why we can’t have that now and skip death. When Jesus tells us that he is our joy, we wonder why our hearts are often missing that feeling. When Jesus tells us that we are safe in his arms, we wonder why we have to carry so much insurance or worry about school and church shootings or hurricanes and tornados. When Jesus tells us that he is our Good Shepherd, but it still feels like we are being led through a field of weeds and wolves, it is hard to trust in him to have the power and love to shepherd us.

We ask Jesus if he is who he says he is because we do not feel like we have all we need from someone called our Shepherd. It often feels like we are being led around in circles in one big pasture. We are tempted to believe that there is no point to following Jesus because there is so much wrong in our world and our lives, and nothing seems to get any better. We are tempted to give up on Jesus and follow what our own heart says or our family, friend, celebrity, talk show host, blogger, athlete, politician says because they might give us what sounds like some practical advice to get through this pasture of life without feeling lost or abandoned until we get to the end of our lives and can die in peace. And there in death is where we see most clearly that following anyone but Jesus, does not satisfy us. The lies of our sinful nature, the lies of the world and the devil are that Jesus is not who he says he is. The lie those who asked Jesus who he is believed was that he was not the Good Shepherd. They believed he could not lead them through this life, and they did not see that there was a pasture beyond this one with only one Shepherd.

Jesus is not leading us in circles through weeds and wolves in this one pasture to die without peace. Jesus is leading us on the one path through all the weeds and wolves of this fallen pasture to the gate that leads to heaven. Jesus has walked through this pasture to the gate on the other side which is death. Jesus passed through it and came out on the other side alive. Jesus wants us to know the reality of this world. It is a world of sin and lies. Many lies from our own sinful hearts and from others around us will try to turn us away from Jesus making promises they can’t keep, promises to give us fulfilling lives, joy, safety and peace, but without Jesus it all ends in death and hell. But with Jesus, we get through this life and on to eternal life. Jesus told the Jews who asked him who he was, 27 “My sheep listen to my voice; I know them, and they follow me. 28 I give them eternal life, and they shall never perish; no one will snatch them out of my hand.”

Listening to our Good Shepherd Jesus’ voice, we know where he is leading us. In our second reading from Revelation 7, John sees heaven and all those who listened to Jesus. All the believers in heaven were pictured standing in white robes and they are described as 14…“These are they who have come out of the great tribulation; they have washed their robes and made them white in the blood of the Lamb.” The sheep who follow the Good Shepherd, the believers who follow Jesus, are the ones taken out of the great tribulation. As we wait for heaven, it is not in a flowery meadow with the sound of harps and rivers of Fuji water.

We wait for heaven in real life and it is difficult, but with our eyes on Jesus, we have hope to make it through the difficult times. With our eyes on Jesus, we are able to respond to natural disasters, shootings, raising children, marriage, finances, politics, etc. with wisdom, clarity and confidence from God. As John looked at the believers in heaven, he heard these words, 16 ‘Never again will they hunger; never again will they thirst. The sun will not beat down on them,’ nor any scorching heat. 17 For the Lamb at the center of the throne will be their shepherd; ‘he will lead them to springs of living water.’ ‘And God will wipe away every tear from their eyes.’”

At the end of my conversation with Erica, she told me how grateful she was for her mother. She fought her mom to go to church when she was younger, but she started going to church after she was out on her own and she now takes her kids to church. Erica is grateful that Jesus never stopped holding on to her, even though she had given up on him. We all face the temptation to question who Jesus is, but his Words and what he has done testify to who he is, John 10:11 The good shepherd lays down his life for the sheep. Always give thanks that you get to look forward to the green pastures of eternal life in heaven because Your Good Shepherd Jesus holds on to you. Amen.

Christ Calls for a Change