Review and Remember Our Redeemer

Are you tired of hearing about Israel? It’s that little nation on the other side of the world, but we hear about it all the time. If you’ve been tuning in lately, that’s all you have heard about. The news has been all a buzz with it the last week; the relationship between Israel and Palestine, the ancient claim to the Western Wall, the UN decision, the old administration and the new administration. It’s a full-time job keeping up with the news, but you know we talk a lot about Israel in sermons too. It seems like all we preach about are the sinful people of Israel. God blesses them, then they turn their backs on him, then he forgives them.

Reading through the first four verses of Hosea chapter 11 paints a clear picture that God loved the people of Israel. He cared for them like a loving father cares for his son. God says he taught Israel to walk, held him in his arms and fed him. God gave Israel everything they could ever want, but they ended up being a spoiled brat. The people took God’s love for granted and in doing so they rejected him.

“When Israel was a child, I loved him, 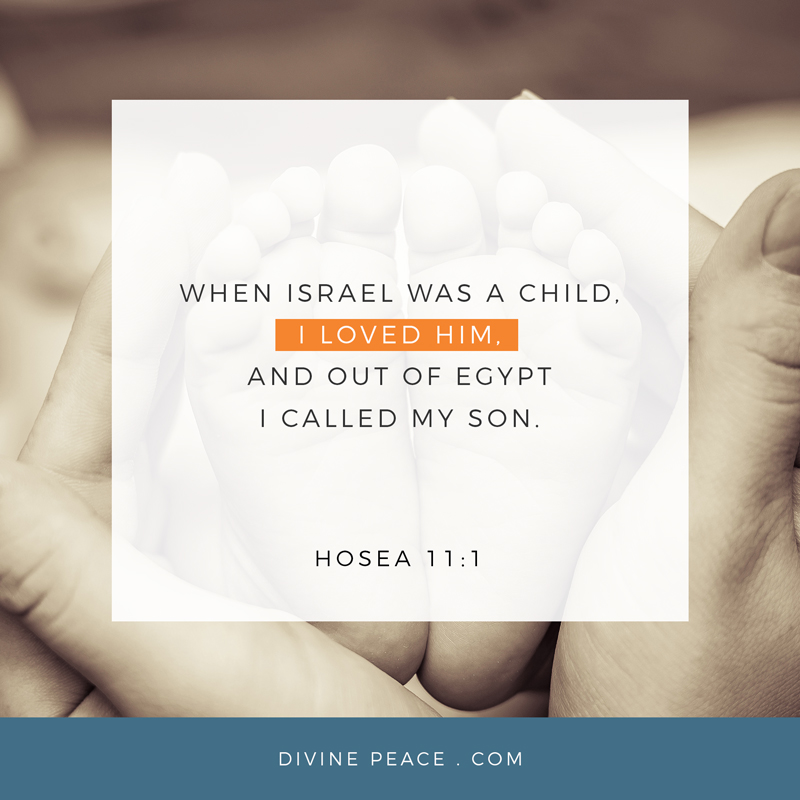 and out of Egypt I called my son.
But the more they were called,
the more they went away from me.
They sacrificed to the Baals
and they burned incense to images.
It was I who taught Ephraim to walk,
taking them by the arms;
but they did not realize
it was I who healed them.
I led them with cords of human kindness,
with ties of love.
To them I was like one who lifts
a little child to the cheek,
and I bent down to feed them.

If God knows all things, why would he choose a people that would constantly give him trouble? The truth is that God knows any people would have given him trouble. Back when God first called to Abraham, he easily could have called Abrahams neighbor or some guy in the next town over. It wouldn’t have mattered. Because Israel isn’t the chosen people because they are special, but because God is gracious.

In its thousands of years of existence, the Israelites were never anything special, instead it was God’s promise that made them special. In the Garden of Eden, God promised a Savior to Adam and Eve and that child could have come from anyone. But as time went on God made the promise more specific, to Abraham, then to Judah, then to David and finally to Mary. And Mary gave us one of the best reactions to learning she would be the mother of Jesus, fear and humility.

God had chosen to save the world through fragile, fallen humans. Mary knew she was a sinner. When the angel appeared, she questioned why such a blessing would be given to her. And, the truth is that it was nothing special about Mary. She was a descendant of David, so she fit within God’s promise. Last week, we heard just how little human impact their would be concerning the Savior. Isaiah said, the Savior would be born of a virgin. The Savior was born by the power of the Holy Spirit and not a human father.

This is what makes Israel so unique and special. God was the one at work to make them great. Greatness not by the human standards of earthly wealth or military victory or lasting dynasties of kings, but God’s kind of greatness, his great love. His great love preserved a sinful people long enough to make good on his promise of the Savior. To send someone who had the power to create a nation that would last beyond this fragile, fallen world. Jesus came to save us from this world so that we would have hope in a far greater home, a home in heaven.

Jesus had no other reason to come to earth than to save us. We had nothing to offer him. He knew that the world would turn on him, that he would be rejected, beaten and put to death. He knew that though he would die for the sins of the world and rise victorious, many would not believe. He also knows that those few who do trust in him would face rejection in the world and the struggle to keep the faith.

God has not left us alone though. He has cared for all of us far more than we deserve. He has been a father to all of us. In our baptism, God took us who were fragile and fallen, and he poured out his love on us. We were spiritually dead and hopeless, and he forgave us for all our sins. Through baptism God takes water, water that has no power in itself to wash away sin and through the power of his word, he promises that our sins are washed away.

Again, God works through what was nothing special and when we review and remember who we are. We must confess that he has done the same to us. We were nothing special, we were lost and had no idea who could help us. It was God who saved us; we were chosen to believe in God. We did not come to God; we did not decide he was the one. Instead, he told us who he was, what he had done for us and he called to us through his Word. He worked faith in our hearts through his word and by the power of the Holy Spirit.

As we review and remember another year, we cannot help but give thanks to God. We give thanks reviewing what he did for us through our Savior Jesus and we remember what he promises while we wait to see him face to face.

Hosea began chapter eleven with a heartwarming Hallmark Channel picture of God as a loving father raising Israel as his son, but in verses 5-7, the picture quickly changes to something from HGTV. The people of Israel are acting like they have grown tired of their old house and are ready to appear on an episode of House Hunter’s International. The home land of Israel was great and God has been faithful, but maybe the grass will be greener on the other side.

“Will they not return to Egypt
and will not Assyria rule over them
because they refuse to repent?
A sword will flash in their cities;
it will devour their false prophets
and put an end to their plans.
My people are determined to turn from me.
Even though they call me God Most High,
I will by no means exalt them.

Hosea knows the people of Israel are heading for disaster, once again they have abandoned God, but this time he is going to let them fall hard. God allowed his chosen people to be conquered by the Assyrians. And he says they will become so desperate they will even try to run back to Egypt, the place where they were slaves, where their sons and daughters had been murdered and where God rescued them from. Israel would try to flee to Egypt, but it wouldn’t work. Assyria’s armies swept through Israel and destroyed them.

Have you ever felt like the answer to your problems could be solved by one of those reality TV shows? It’s the time of year when everyone like to talk about New Year’s resolutions. Would the chance to go on House Hunter’s International make all your dreams come true with a new beach house in the Bahamas or an apartment in France? Maybe your old junker car could get a fresh coat of paint and new interior? You could get on cooking show and finally graduate from the microwave and toaster. Or what if they had a reality show that promised to solve all your problems, money, family, a home, job, vacations, food? I bet you would do anything to get on that show.

The truth is no reality TV show can solve all of your problems. In this world, we will have trouble and the only escape is through Jesus. God is the only one who can give us all we need and we cannot give him anything for it. However, everything God gives us isn’t free. God demands we not sin against him and when we do we must be punished for those sins. That remains as true in Israel’s day and as it is for us now.

So, God sent our Redeemer. Jesus came to pay the price for our freedom.  Jesus both kept God’s demand to be without sin and paid the punishment all our sins deserve. And you would think that knowing that would be enough to make us live our whole lives in thanks to God, but we don’t. We continue to sin against him. We return to the sins we always do; we add to our guilt and we keep God in our back pocket while we look for the latest and greatest.

That’s why we keep talking about Israel. We review and remember that after so many failures to trust in God, he allowed them to be destroyed and deported. God records all these things so that we see two things. One, God takes sin and the punishment for sin seriously. Two, God takes a lack of repentance seriously. All of us know who Jesus is and what he has done for us, but it is not a license to sin. Instead, in Jesus we are free from sin. We are free not only from its consequence of eternal punishment and separation from God’s love in hell, but we are also free from its control over our lives.

God’s faithfulness never runs out. Jesus sacrifice on the cross can never be undone. Though you fall time and time again, his love for you remains. You are special to God, not because of anything you have done, but because of who he is. You are special to him because of his love. It was his gracious love and work through your Redeemer Jesus that freed you from sin and won you an eternal home in the paradise of heaven.

I got really tired of hearing about Israel this past week. The news channels couldn’t talk about it enough. Reviewing all the interviews and remembering all the policies. Brothers and sisters, this New Year, tune into the channel where you hear about the true Israel. Review here, at home, with family and friends God’s promise to save you. And Remember that you have forgiveness and life through your Redeemer, Jesus. Amen.