Your God Reigns! With Power to Comfort

The air was thick with anticipation. It had been clear for a while now that the time would come for this event to take place. Even so, the whole city was quiet. Then the cry rang out. They are here! The Babylonians had arrived at the walls of Jerusalem. Their army began its assault on the city. Soon the city had fallen and its people deported.

Not the event you thought I was describing on Christmas?

The air was filled with anticipation the night of Jesus’ birth and Mary and Joseph had known for nine months that this night would come, but the little town of Bethlehem was quiet. Then the newborn’s first cry rang out, Jesus was born and the heavens were filled with the voices of the angels singing, “Glory to God in the highest heaven, and on earth peace to those on whom his favor rests.” That night changed the world forever.

What about the people living before Jesus’ birth, what hope did they have in Jesus? The reading we base our meditation on this blessed Christmas day comes from the prophet Isaiah. Isaiah lived 700 years before Jesus was born, yet he believed in him. He believed in the promise of the coming Savior. He trusted God was going to send a Savior to bring peace on earth, but Isaiah would never see him. In fact, everything Isaiah saw in his life made the promise of the Savior seem impossible.

Isaiah lived at a time of war. He was an Israelite, he belonged to God’s chosen people. God had promised the people of Israel that the Savior would be born from one of their families. Isaiah was a prophet called to share more details about the Savior with Israel. His message to Israel was one of hope in a powerful King, but it had been a long time since the nation had seen a king worth anything.

In Isaiah’s day, Israel’s status as a great nation had long been forgotten. The nation was formed when God assembled the twelve tribes of Israel into one nation. God gave them great kings that expanded their territory and treated the people fairly. They had kings like David, a great military leader and defender for Israel. Then, his son Solomon ruled as a wise king and judge over the people. He built the great Temple of Solomon in Jerusalem, where all of Israel went to worship God.

But after Solomon, the kings of Israel failed to trust in God. They led the people of Israel into unbelief turning to false gods and idolatry and the nation fell apart. By the time Isaiah was born and began to serve as a prophet, the kingdom of Israel was split into two kingdoms. The ten tribes of Israel to the north and the two tribes of Judah to the south. God’s chosen people had turned on each other and the nations around them took advantage of them in their weakness. Assyria eventually overpowered the northern kingdom of Israel, destroying its cities and carrying off God’s people as prisoners.

Isaiah was called to tell the Southern kingdom of Judah that they were going to suffer the same fate as their brothers and sisters to the North. The future already looked bleak and the people hated Isaiah for his message of war. Most ignored Isaiah’s message, but his prophecy came true and the Babylonians came. They destroyed Jerusalem, the Temple and carried many of the people away into exile.

It sounds hopeless, how could Israel recover from being overtaken and its people moved hundreds of miles away from their homeland? Yet, here we are celebrating the birth of Jesus, an Israelite, born in Bethlehem, just four and a half miles from Jerusalem, the capitol of Judah. Had Isaiah’s prophecy failed? 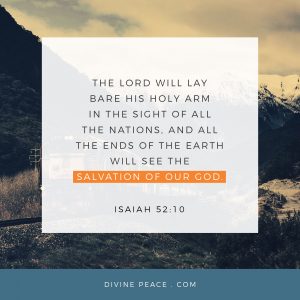 Isaiah told the people God was going to punish them for turning away from him at the hands of the Babylonians, but he also had the blessing of sharing the message of God’s rescue plan for his people. He said:

The Lord will lay bare his holy arm in the sight of all the nations, and all the ends of the earth will see the salvation of our God.

Isaiah’s prophecy revealed that God himself would rescue his people, but the Israel he preached to had not seen God’s power for a long time, their parents who were eye witnesses to God’s awesome power to rescue and save his people had not been passed on and faith had been lost.

They were not like Adam and Eve who heard the creation story from God’s own mouth. They had not lived through the flood like Noah. They had not seen the ten awesome plagues deliver Israel out of Egypt or see the waters of the Red Sea parted for their ancestors to walk through on dry ground. They had not tasted the manna from heaven or the seen the pillar of fire and cloud lead the people safely through the desert.

The people of Israel had not seen these things, so they did not trust God’s power to save them. You and I have not seen the great miracles of the Old Testament either. Have you struggled to trust in God because his power seems far away from your life. Do you ever feel the blessings God promises are only things far away in heaven? Do you know hardship and despair as you live in fear and anxiety in this corrupt world? Can you relate to the people of Israel who found it hard to trust in God?

God knows that you struggle in this sinful world. He knows that doubt and fear overwhelm your thoughts, but what display of power could God show you that would convince you to trust him completely? God gave these words to Isaiah for hearts like yours and mine that struggle to see God’s power in this ruined world. 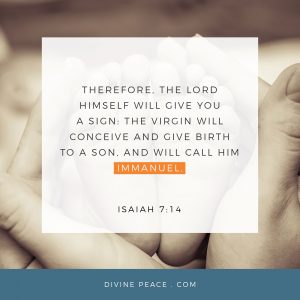 Therefore, the Lord himself will give you a sign: The virgin will conceive and give birth to a son, and will call him Immanuel.

Isaiah prophesied Jesus’ birth 700 years before it happened. God promised to send a Savior, born of a virgin Mary and he would be called, Immanuel, which means God with us. The power that you wish you could see is right in front of you this Christmas. God sent his Son Jesus to be born. He sent him to save us from our worst enemies of sin, the fear of death and the devil.

God displays his awesome power by keeping his promises and he gave Isaiah many prophecies. He told the people that because they had turned away from God, he would allow them to be taken over by the Babylonians, but God would not leave them as exiles. God promised he would bring them back to their homeland and restore the kingdom of Israel. God made good on all of those promises. The people of Israel were allowed to return to Israel after seventy years in captivity. They were able to rebuild Jerusalem and the Temple.

Isaiah prophesied a time when the people of Israel would say,

Burst into songs of joy together, you ruins of Jerusalem, for the Lord has comforted his people, he has redeemed Jerusalem.

God’s power had delivered the people from exile, but the physical Jerusalem was not their source of strength and comfort. Isaiah had foretold of the return to Jerusalem and the defeat of Israel’s enemies, but there was a greater enemy and a greater King who would lead them to victory. 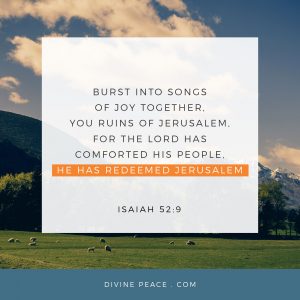 We did not watch God create the heavens and the earth, but we have all seen the sun rise and set as our world spins in the vast vacuum of space. We were not in the ark with Noah, but we have seen the ocean. We were not there for the ten plagues and the parted sea, but we have seen a flock of birds fly through the air and walked on dry ground that keeps the waters in their place. We have not tasted manna or seen the pillar of cloud and fire, but we have our daily bread and we watch time pass with the seasons, fall, winter, spring and summer.

Most of all I have seen the power of God recorded in his word. I have read the promises and prophecies God made to all people. To fix our broken relationship with him, to give us peace from the hardships in our lives, to forgive our sins and promise us eternal life in heaven.

The words of Jesus and the great things he has done are our source of comfort in this life. He defeated death through his innocent sacrifice on the cross. He redeemed us by trading his sinless life for our broken, sinful lives. We are now at peace with God and confident that he holds the power of life and death. Jesus who rose from the dead will bring us back to life and take us to live with him in heaven forever.

For now, the air is thick with anticipation as people look forward to presents and time with family. For now, the world may be quiet when it comes to confessing Jesus as the Savior. And for now, we may sing with all joy and peace today that our Savior has come, but we know that we will go home to our lives that are not always joyous or peaceful. 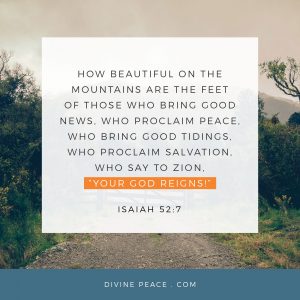 So, for now, before we are welcomed into our eternal home in heaven we can rest secure knowing God keeps his promises. We rest secure knowing that our God loves us. He loves the broken hearted. He loves us when the rest of the world rejects us. When the world demands perfection and we live with constant anxiety that we are not good enough, our God loves us and does not require anything from us. And so, as we are gathered here today and for the rest of our lives as we treasure God’s gift to us in the Bible, the true Christmas story, we can say: